Barcelona is widely known as one of the most gay-friendly cities in Europe, attracting tens of thousands of LGBT tourists every year. Given its coastal location and year-round climate, its hardly surprising that out of 4km of beaches, more than one has become known as ‘Barcelonas gay beach.’

In fact, both gay locals and tourists to Barcelona are spoilt for choice. Barcelona has no less than 3 gay beaches (with one being very long and technically three in one!). Barcelonas gay beaches have also been deemed blue flag beaches, awarded for their high levels of cleanliness, environmental standards, safety and facilities.

One of the biggest selling points is how easily accessible the gay beaches are, right on the city’s doorstep. You can easily reach the gay beaches in Barcelona using the cheap public transport regardless of the neighbourhood you are staying in. In fact, one of the things that we loved most when we visited was that we didn’t have to choose between a city sightseeing break or a beach holiday – Barcelona combines the best of both!

Out of the 3 gay beaches in Barcelona, 2 have become more officially known as ‘gay beaches’. The third is still a very popular choice for both gay locals and tourists, so for the sake of this article we will include it in our list as an ‘unofficial gay beach.’

Mar Bella is known as THE gay beach of Barcelona and is most definitely the go-to choice of both the local LGBT community and visitors. Mar Bella is a little bit further from the city centre than the other beaches, which is possibly why it has become one of Barcelonas only nudist beaches. Being a nudist beach is probably why it has also become the popular gay beach too!

However, when I (Ben) visited recently during the summer, aswell as the nude sunbathers there were plenty of hot gay guys showing off their bronzed bodies in the latest speedos.

Mar Bella beach is also home to the well-known gay beach-bar Chiringuito BeGay. This is a very popular meeting point and hangout for locals and is a great place to have lunch whilst at the beach aswell as working your way through their cocktail menu!

And as is quite common on gay beaches, Mar Bella has a reputation as a little bit of a cruising ground, among the bushes that separate the beach from the path. Who needs Grindr, right? In fact, whilst there, I witnessed 2 hot young guys making eye-contact whilst nude sunbathing. This quickly turned into one joining the other on his towel before heading for a quick make-out session in the sea. OK, maybe they had previously connected on Grindr and recognised each other – but I like to think this was good old-fashioned, pre hookup-app flirting!

TOP TIP: During the Barcelona Circuit Festival which takes place in August, Mar Bella is packed from sea to shore with bronzed muscle boys. If you want to make sure you get yourself a spot, get there early!

Although the furthest from the city centre, Mar Bella is still very easy to get to. The easiest way is to take the Metro L4 (Yellow Line) to Poble Nou station. From here it’s a straight walk down Carrer del Litoral (Carrer de Bilbao higher up the street), past the skate park and then to the left you will see Chirinquito BeGay.

Barceloneta is a small neighbourhood close to the sea-front. Here you will find three beaches neighbouring each other, Somorrostro, Sant Miquel (more commonly known as Barceloneta Beach) and Sant Sebastien.

Out of the three beaches here, Sant Miquel beach is the second official gay beach in Barcelona. Situated closer to the city centre, it can get very busy here especially at weekends, and so whilst Sant Miquel is the primary gay beach, visitors will spread out across all beaches.

Sant Miquel to Sant Sebastien forms over 1km of sand, lined with various choices of beach cafes and restaurants. And if at the end of a hard days sunbathing you want to treat yourself, head to the nearby, popular W Hotel Beach Bar for a cocktail.

TOP TIP: Being so close to the centre, Barcelonetas beaches are a hotspot for unwelcome visitors such as beach vendors, and pickpockets. Stay alert and keep an eye on your belongings. On a positive note, keep an eye out for the very attractive Go-Go boys and club promoters who often visit the beach to advertise the various clubs and parties!

How to Find Barcelonetas Beaches

All three beaches here are very easy to reach. Take the Metro L4 to Barceloneta, and exit on Passeig de Joan de Borbo towards the seafront.

Attracting a mix of both gay and straight sunbathers, Nova Icaria is known as an ‘unofficial gay beach’ of Barcelona.

Although quieter than the other beaches, it is still a popular choice due to its location close to the Olympic Marina. Beach goers will also enjoy the wide range of food and drink options found nearby.  The promenade just behind the beach has two beach bars and restaurants. For a wider range of cafes and restaurants, Port Olimpic is just a short walk away.

How to Find Nova Icaria Beach

The nearest Metro station to Nova Icaria is Cuitadella Vila Olimpica, which again is on the Yellow Line. Once you have left the station, turn down Carrer de Ramon Trias Fargas until you hit Avenida del Litoral. Turn left and follow the Avenida until you reach the promenade.

Given that most visitors will be on a short city break, and will have limited time for the beach, our top recommendation is Mar Bella. But if you do have extra time, it’s worth checking out the various other beaches. Let us know in the comments which was your favourite!

If you need accommodation in Barcelona, make sure you book in advance! We know all too well from personal experience that prices can shoot up when left to the last minute!

For more gay beaches around Europe, click the link below!

Liked this post? Save it for later and pin it! 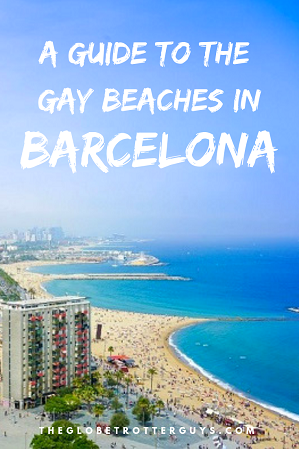