Athens has been on our list to visit for our long time! It’s an intriguing city steeped in Greek history, mythology and some incredible Greek food. However, we did not know much about ‘gay Athens’ or whether there would be a gay scene in Athens at all.

Luckily, we spent 10 days in Athens, made friends with some locals and got to explore the gay scene. In this short guide, we will explore the gay bars, gay life in general, gay tours, saunas, hotels and things to do in Athens.

Let’s get started with our gay Athens guide!

Gay Area in Athens and the Gay Scene

Don’t come to Athens expecting a huge gay scene like you might find in Berlin (see our gay guide to hedonistic Berlin). In Athens the gay scene is much smaller but fun nevertheless.

The gay area in Athens can be found in Gazi, named after the fact that this area was home to the old gas works.

Gazi is considered to be the upcoming, cool place where young people spend their evenings to eat, drink and party. It may therefore be no surprise that this is where the gay bars and gay clubs in Athens have found a home.

Athens is generally considered to be a gay friendly city and you are unlikely to run into any problems.

It is typically more conservative than other cities and locals might not always be out to their co-workers or be showing PDAs.

As a tourist visiting Athens, there is nothing to worry about, just enjoy the city.

If you are looking for official gay clubs in Athens then there are 4 main gay clubs in total. There are others that are considered gay friendly, but these are the main ones to head to:

We had a great night in Sodade. It was €8 to get in which included a drink. This was recommended to us by the local guys we made friends with as their number one choice.

They have a front room with a DJ who plays a good mix of mainstream music which suited us and a back area where they focus more on house music.

The crowd was quite mixed with a lot of attractive Greek guys.

The club is open every night. From midnight for Friday and Saturday and 23:00 on Thursday for a drag show. 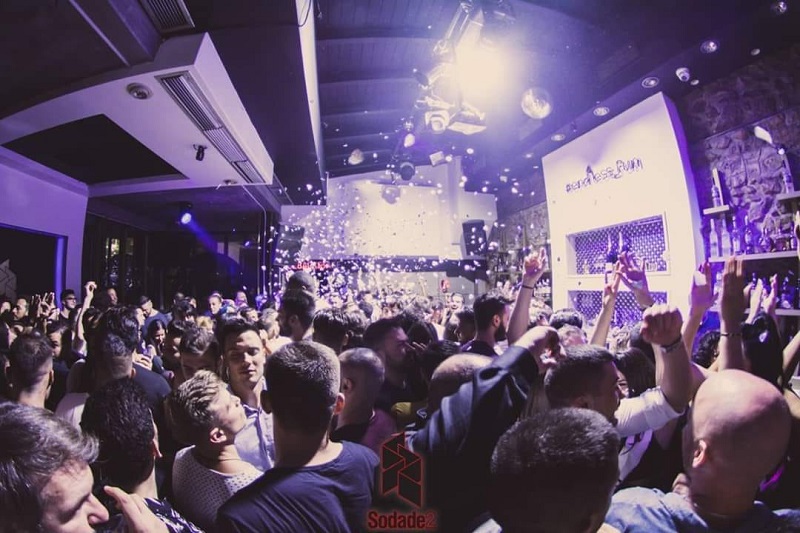 Shamone is also a very popular gay club in Athens.

Here the décor is quite posh and trendy with a real mix of music playing from mainstream to Greek artists. They also do drag shows.

Big Bar Athens has been open since 2004 and is a gay bar aimed at bears. While the crowd is mainly bears, you can expect many different types of guys there.

The crowd is said to be friendly, as are the bar tenders and DJ. Go here for some good music and cheap drinks.

Open Tuesday through Sunday from 22:00.

This is one of the larger gay clubs in Athens

It is open nightly with different theme nights. They have Karaoke Mondays, Drag Wednesdays, and Greek night Thursdays. This place gets very busy on a Saturday.

The first official gay pride in Athens was in 2005 with its very first parade through the city centre.

Nowadays the parade draws thousands of spectators to celebrate the LGBTQ+ community of Greece.

Pride in Athens is a one-day event normally on a Saturday with things kicking off from 17:00. The main event during Athens pride is a concert in the centre of the city at Syntagma Square.

Like most of the coast here, the beach is rocky but as a result you are granted beautiful clear waters to swim in which may be welcome after spending time in the hot city itself!

The beach is a 30-minute drive from the city centre or you can attempt getting a local bus (or Uber). It known for being hot, busy and naughty during the summer.

Alexander Sauna brands itself as being the number 1 gay sauna in Athens.

It has been open since 2007 and has three floors with everything you can imagine including a steam labyrinth and foam area.

They also have a shop on site selling many popular gay brands.

Flex Sauna also brands itself as the number 1 gay sauna in Athens.

Again it has everything you would expect from a gay sauna and attracts both tourists and locals alike.

There aren’t any exclusively gay hotels in Athens so your best bet would be to pick one in or close to the gay area of Gazi.

Fresh Hotel Athens – This is a stylish, modern and trendy hotel with a rooftop bar. It is also a good option as it’s near the gay area of Gazi.

Pinacota Suites Athens – This is where we stayed and we loved it. We were the first ones to ever stay in our suite as the entire place is brand new. We love the style, décor, the gym and we were well looked after by the guys who owned it. Its well located being a 40 minute walk or short taxi ride to the Acropolis.

A for Athens – Another new hotel which is near the gay area. This gets excellent reviews on TripAdvisor especially for its location. It’s rooftop bar has a view of the Acropolis.

O&B Athens Boutique hotel –This is another stylish hotel with some rooms offering a view of the Parthenon itself. People also rave about the excellent level of service.

If you want to learn more about the gay scene in Athens, check out these tours. These are especialy good for solo travellers wanting to meet other gay travellers or if you are short on time in Athens and want to see as much as possible.

How long to spend in Athens?

We asked a few people how long we should spend in Athens and most said 2 nights is enough.

After our time here, we would agree that two or three nights would be enough to see the main attractions of the city, some of which we have listed below:

Things to do in Athens

Acropolis – The Acropolis is a citadel on top of a hill in the middle of the city. There are many ancient Greek structures to see including the most famous of all, the Parthenon. It’s a real journey back in time and you get excellent view of the city. Make sure to head there early because there is not much relief from the heat! Tickets for the Acropolis alone are €20 but you can also do various tours to learn much more. 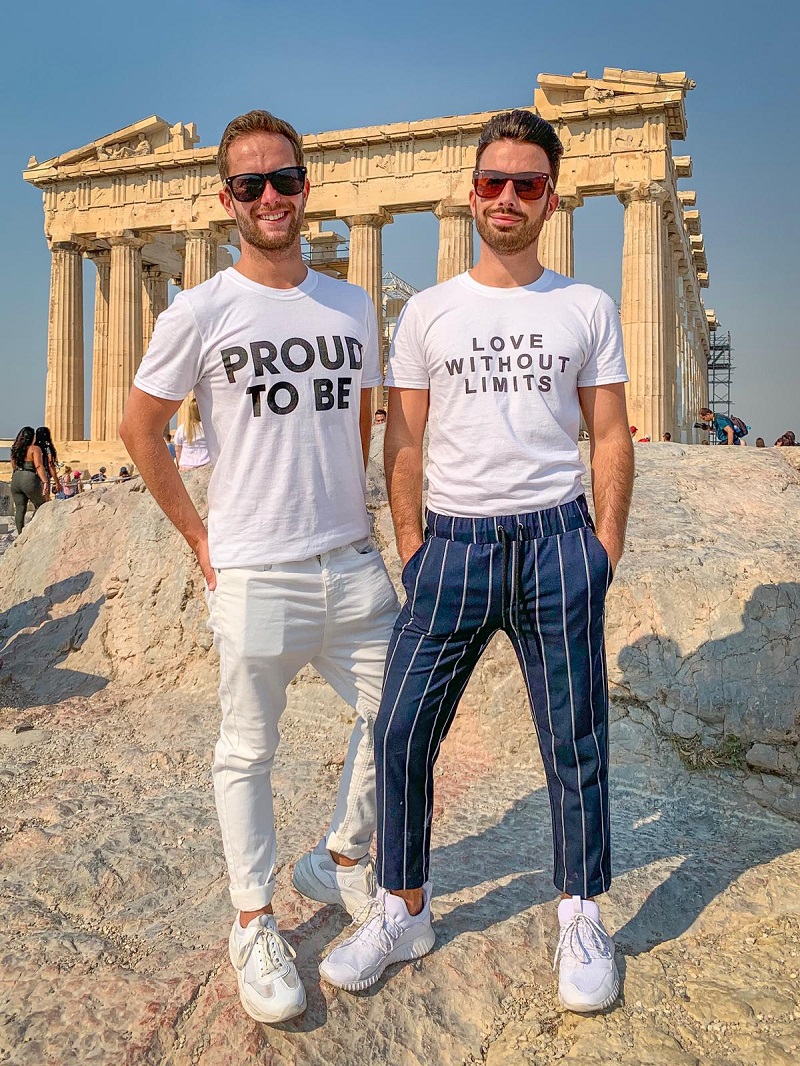 Beaches – if you have time, you can reach many beaches within an hour. Some are stony, some are sandy. We actually drove out the city north to Chalcis to a local beach where we were the only tourists. There are also plenty of beaches to choose from close by along the western coast of Athens.

Syntagma Square and its surroundings – Syntagma square is where a lot of events and concerts happen throughout the year including Pride. Just behind the square is a huge national garden to explore as well as the nearby Temple of Olympian Zeus and Hadrian’s Arch.

Food and Drink –  we did not realise quite how much we loved Greek food until we were taken to a local restaurant called Kanella. Make sure you get out and try as much as possible. When it comes to drinks, Ouzo is the drink of choice with some water as the ‘mixer’.

Given you are likely to spend just a couple of nights in Athens, the easiest option is to book a short tour. take a look at the most popular options below:

It seems there is more to Athens and its gay scene than we first thought. It may have a smaller gay scene than other major European cities, but don’t forget that Athens is also the gateway to the gay mecca of Mykonos to!

We hope you found our guide useful! We are always trying to keep up to date so if you find any new clubs, let us know!

Liked this post? Save it for later and pin it! 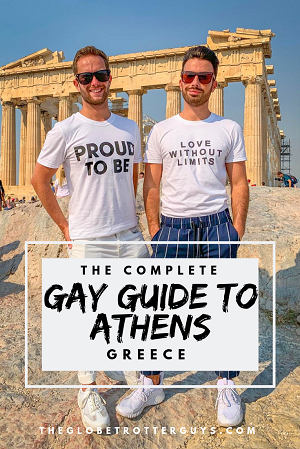