Cape Town may be a lot smaller than other cities in South Africa, like Johannesburg, but when it comes to gay clubs and gay bars, Cape Town is a winner!

You might immediately Google ‘Best Gay Bars in Cape Town’ when you arrive, but what you should also know is that Cape Town as a whole is very gay friendly – something which we found very true during Cape Town Pride.

This means that a lot of bars that aren’t ‘officially gay bars’ in Cape Town will still have a very mixed and diverse crowd. This is especially true if you head to the touristy bars on Long Street.

That being said, when it comes to gay clubs and gay bars in Cape Town, you will be pleased to know that there is a good selection of options! Take a look at our up to date list below and let us know where you end up!

If you are looking for the gay area in Cape Town, the majority of the gay scene is focused around the De Waterkant area. We’ve included addresses for each bar so you can see which fall into this area and which are a little more further afield:

If you want to see the hottest bar staff in Cape Town,  Crew Bar will leave you with your mouth wide open. This is one of the best-known gay bars in Cape Town and has recently been refurbished.

Crew Bar has two dance floors, weekly themed nights and is open every night of the week.

Prices here are a little more expensive than the other bars, but when the go-go boys and bar staff start dancing topless or in speedos, you tend not to mind so much.

The music here tends to be more house and less pop.

Next in our list of Cape Town gay bars is Pink Panther.

There are two Pink Panther gay bars in Cape Town. Pink Panther 2 has the better music for us, playing pop with a little bit of house mixed in.

If you want to live it up a little, here you have the option of hiring a VIP booth for the evening and enjoying table service!

Zero21 is a gay social club found about 15 minutes from Long Street.

This is known for its drag shows and is one of the cheapest places we have had drinks, with a large glass of wine costing just over $2, and a double spirit and mixer just over $4. Zero21 has a mixed crowd of locals and the odd tourist.

When we visited the music was mainly a lot of old school RnB, which the locals seem to really enjoy.

Café Manhattan is one of the oldest gay bars in Cape Town. It has a little bit of a cowboy theme and a chilled atmosphere during the week.

Whether you are there for food, drinks or just to hang out this place attracts both tourists and locals. This is a good place to start your evening before moving on to a late night venue. We came here after hiking Table Mountain and devoured one of their burgers with halloumi and avocado – it was really good!

You can also come along for Happy Hour every day between 4pm – 6pm and again from 9pm until 11pm. This applies to selected drinks, just ask your server.

Café Manhattan is based in the heart of de Waterkant village and is open daily until 11pm.

This was a gay bar but has been permanently closed!

If you are after more than just a drink and a dance Cape Town has two gay cruising bars available.

This is one of the bars that offers men only nights. These include themed nights whether it be underwear or naked nights.

There is no cover charge for this bar until 11pm when the theme night starts. This gives you a chance to go along and see what you think before committing. For those staying, the bar is quite strict with respecting the theme so its undies as a minimum after 11pm!

Every night starts from 5pm till late except for Saturdays which start at 6pm.

This is a gay cruising bar and sauna.

The bar offers cocktails, beer, wine, milkshakes and spirits. There is also a restaurant offering snacks and coffee. However you are probably more interested in the facilities: they have private cabins, a steam room, sauna, jacuzzi, movie rooms, a sundeck for some incredible views and then of course dark rooms and so on.

When we say gay(ish) – these bars are not officially gay bars, but we would say that they are more than just gay friendly and so definitely worth checking out:

This is not a gay bar as such, but it is definitely worth a visit. Beefcakes is the place for burgers, drag shows and wait staff that look like Abercrombie and Fitch models.

The drag show is actually quite hilarious and the food reasonable at 79ZAR for a burger. If you are really there for a fun night you can take a body shot from one of the waiters – I have to say we were very tempted.

For all of the above reasons, this is very popular now with a lot of hen parties that go here looking for their own beefcakes! Make sure to check availability and book online before you go.

This is not exclusively a gay bar but it is gay owned and known for being a queer space with a mixed crowd.

Here you can enjoy slightly cheaper priced drinks and all kinds of shows ranging from comedy shows to some more queer themed shows such as Boylesque.

Again, not an exclusively gay bar, however this gay owned bar and restaurant proudly underlines its logo with the rainbow flag. It is not a place to dance, however when they occasionally have events they will move some tables to create a small dancefloor.

The food here is really good, we had some very tasty springbok, the drinks are reasonably priced and it’s the perfect place to sit and watch the sun set in Camps Bay. It was a bonus for us that while we were there for food they played Ariana Grande and Little Mix!

We first visited Prison Bar many years ago when it was Beaulah Bar which was a gay bar. During Pride we returned to find the name had changed. We spoke with Prison Bar to see if it was still a gay bar and were happy to be told:

Drinks are cheap, bar staff are friendly and there is a small dancefloor with a pole at one end if you fancy a go!

Gate 69 is the place for a full on comedy and drag show. This isn’t just a small show in a bar or club by any means.

The shows regularly change and the cost of a ticket includes a designer mezze served on a double-tiered Lazy Susan, a separate hot soup and bread service as well as a purple Patron soft serve ice-cream for dessert. Like being in a theatre, the cost of a ticket is tiered depending how far from the stage you are.

Crust is a small gay owned cafe found at the end of Long Street. Outside of its normal hours it runs a very fun quiz night hosted by local drag queens! You can head there from 6pm for food and then the quiz usually starts at 7:30pm.

We really enjoyed it and it was a good way to socialise rather than just going to another bar.

The event is only once a month and to find out when, type in quiz at Crust into Facebook.

Village Drinks at the Radisson Red

This is a monthly event held for LGBT professionals living or visiting the area. Check out ‘Village Drinks’ on Facebook to see when their next event is.

So there you have it. Before coming to South Africa and specifically Cape Town we had no idea what the gay scene would be like or if there would be one at all. Make sure that you check out these gay bars in Cape Town but don’t forget, many other bars will also be very welcoming! Have fun!

For more about Cape Town check out: 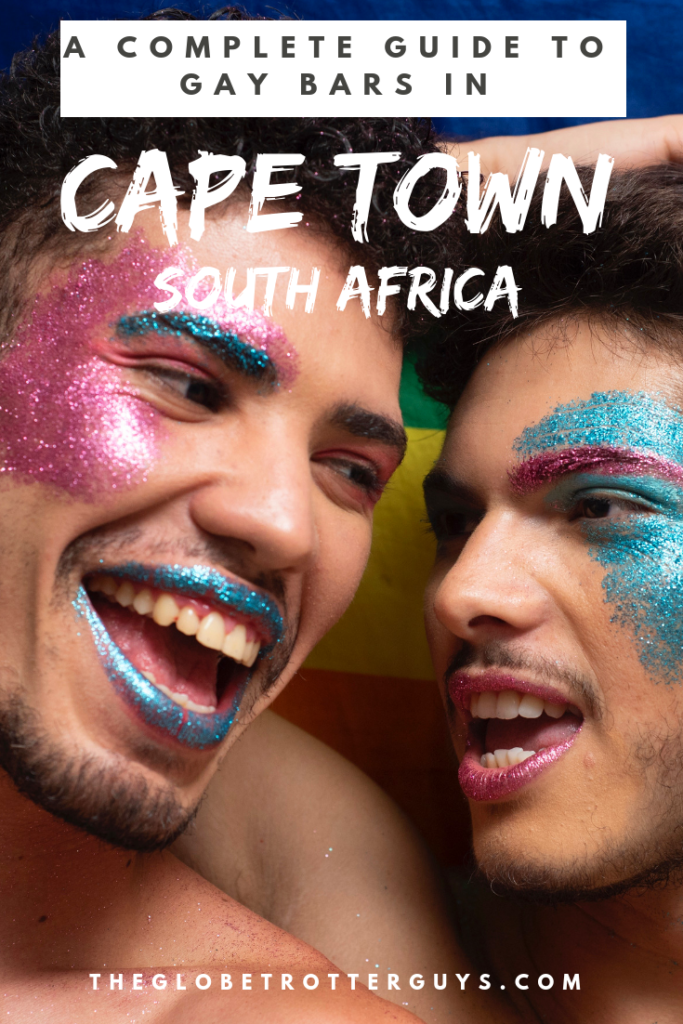 Gay Guide to Venice: A Weekend in Gay Venice, Italy