Mykonos is the number one gay hot spot in Greece. You could feasibly say that every beach in Mykonos is a gay beach in one way or another!

There are many beaches all around the island however the following beaches are the main gay beaches in Mykonos that we suggest you visit.

We have ordered these Mykonos gay beaches in descending order of ‘gayness’. Enjoy!

Elia is the most popular gay beach in Mykonos. We had the chance to go during Xlsior festival so it was extra busy and extra gay! (Read more about Xlsior festival here).

Its fairly obvious that this is the main gay beach as you are immediately presented with the pride flag upon entering the beach.

Facing the sea, head to the right and you will notice the crowd change becoming more and more gay as you walk further along. This is the main gay area of Elia beach.

If you want to find the gay nude area of Elia beach you need to continue walking up over the rocks. There are fairly clear paths to clamber over and once you are up on the rocks you will see a small cove. This small cove is the gay nude sunbathing area – enjoy! 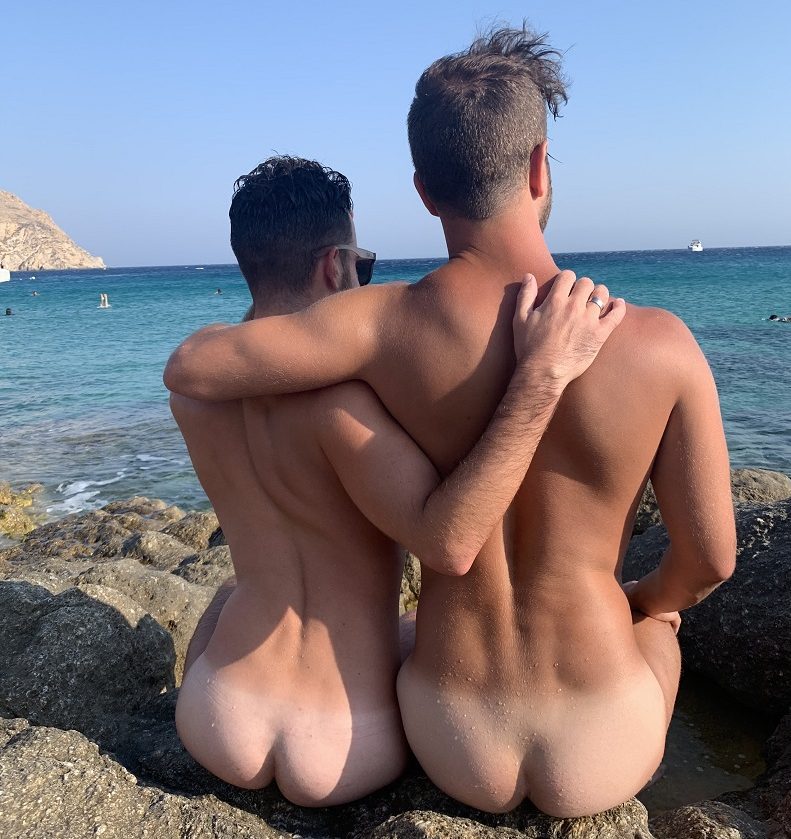 Elia does not have large beach clubs like Super Paradise (below) does. It does still have some places to grabs snacks and smoothies.

You can reach Elia beach via public bus for less than €3 or take a taxi from Mykonos town for c€30.

Super Paradise beach was the original gay beach in Mykonos before being superseded by Elia beach. It is also meant to be the most popular beach on the island.

It still retains its title as one of the main gay beaches in Mykonos in part due to the presence of the infamous JackieO’ beach club, a very popular gay attraction.

Paradise beach is the party beach with night clubs including Cavo Paradiso, Tropicana and Paradise Club. These play music all through the day giving it a beach party vibe throughout.

As a result, you can expect a mixed crowd here, including a lot of gay guys (but not as many as the above two beaches). During Xlsior festival this is where many of the parties are held so it becomes super gay (as does the entire island) during this period.

It’s a similar distance to the other beaches so the transport options are the same.

It is worth noting that sun loungers across all these gay beaches in Mykonos are notoriously expensive.

In Athens we paid €3 compared to Mykonos where they can be €35-45 as standard. There are also areas where you can just chill on the sand.

Getting to the gay beaches in Mykonos

As mentioned for each beach above, the cheapest option is the local buses. A one-way journey is less than €3 and the buses during peak season are fairly regular. There are two bus stations in Mykonos town, the main one near the old port.

The second option is a taxi. For a 25-minute journey to any of these beaches expect to pay c€30. Make sure you agree a price in advance and take the card for the taxi so you can call for a return trip – there is not an abundance of taxis on the island so it can be hard to flag one down.

Finally, one of the most popular methods of transport is hiring a scooter or a quad bike. This can be good because you can take them all across the island but not so good if you want to enjoy a few cocktails at the beach.

We hope this mini Mykonos gay beach guide is useful. It is a truly beautiful island and we can not wait to return one day! Find out more in our Full Gay Travel Guide to Mykonos (inc gay bars and hotels etc).

Don’t forget Mykonos is a small island so get your accommodation booked asap!

For more gay beaches around Europe, click the link below! 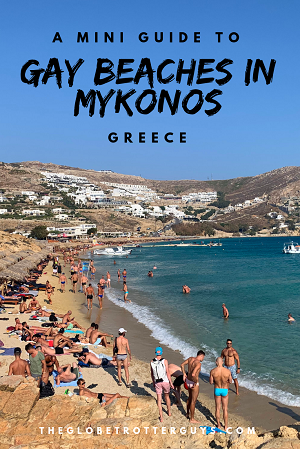 Note:  This post has affiliate links. You won't get charged any extra for using the link but we will receive a small commission for each referral. Please note, all opinions are still our own. You are not obligated to use the links but we appreciate it if you do. Thanks.