We have travelled extensively in Spain. We love the beautiful towns you find all along the coast and best of all, we have found every single one to be very open and gay friendly, including the very trendy Marbella.

Marbellas old town is beautiful with Plaza de los Naranjas (square of the oranges) and its surrounding streets being a particularly picturesque and quaint area to explore.

To the west of the town along what is known as the golden mile of sandy beaches, you will find Puerto Banus filled with posh clubs and expensive yachts – a posers paradise.

When it comes to a gay scene in Marbella, it has a very small one. We visited with friends a few years ago and managed to find two gay bars in Marbella, one called Mikonos and one called Fenix.

These were both very small and packed to the brim with people. Part of the attraction of only having two gay bars meant that it felt like the whole gay population of Marbella was in one place giving it a very friendly atmosphere.

Read on to find out about Marbellas gay bar.

Fenix gay bar was where we ended up till the very early hours of the morning. It is a small bar which turns in to a bit of a dance club towards the end of the night.

It had a fun crowd and reasonable drinks prices (with very generous measures!).

You can find out what events they have coming up on their Facebook page.

It is located in the centre of the town on Calle el Fuente. 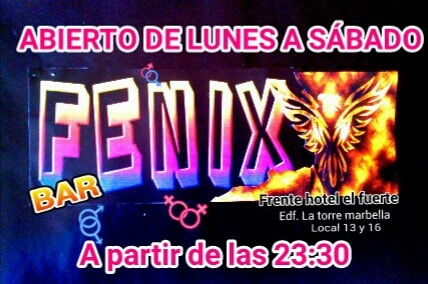 This is where we started our gay night out in Marbella. It was a very small bar with a drag show but it has since closed.

Marbella may not have a huge gay scene, but it is still a beautiful coastal town which we highly recommend visiting. Even with just the one gay bar in Marbella, you can still have a really fun gay night out!

Don’t forget, in Spain everything starts a lot later. The crowd at Fenix bar is very local so they go to the bar at local (not touristy) times meaning you won’t want to arrive at the bar before midnight!

If you find that any new gay bars in Marbella open, please let us know!

Cabopino beach would be classed as the unofficial gay beach of Marbella attracting lots of local gay guys and tourists alike.

Cabopino beach is a 17 minute drive from the town centre. It is a nudist beach and in peak season you are likely to find it gets quite cruisy in the dunes. The nudist and gay ares of the beach can be found to the right of the marina.

There are currently no gay saunas in Marbella, the nearest is in Torremolinos.

Finally if you do want a big gay scene, the closest town notorious for its gay nightlife is Torremolinos. Find out more in our Torremolinos gay guide. 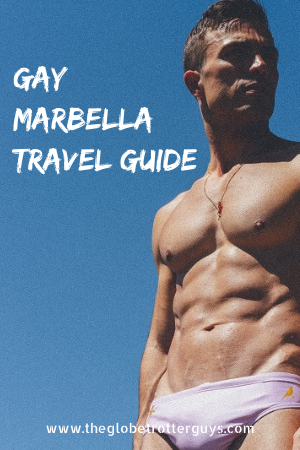