Mykonos is the gay hotspot of Greece and for good reason!

We fell in love with Mykonos during our first visit with it’s iconic cobbled streets, white washed building, pristine beaches, culinary delights and vibrant gay scene – it really was a mini gay paradise.

Mykonos has been known as a gay destination for years and home to one of the largest and most well-known gay circuit parties each August, Xlsior Mykonos, which draws crowds of over 30,000 gay men!

Party scene aside, Mykonos is a picturesque and relaxing island. If you are looking for an idyllic island getaway, we highly recommend.

In our gay Mykonos guide we will share everything you need to know, from the best gay beaches and gay bars, gay hotels, excursions, gay events and some practical tips for planning you trip.

Find out everything to keep you busy in our guide to gay Mykonos!

What made Mykonos gay in the first place?

It’s always intriguing as to why certain places become gay hotspots. From Gran Canaria, to Sitges, Madrid and Berlin, Mykonos is easily within the top 10 gay places in Europe.

One of the most famous gay hotspots in Mykonos is Jackie O’s and it has been said that it was Jackie Onassis herself who influenced the influx of gay travellers to Mykonos back in the 70’s bringing it to the attention of many gay men that followed her.

Fast forward to today and it’s earned its reputation in the gay travel hall of fame.

Where is the gay area of Mykonos? 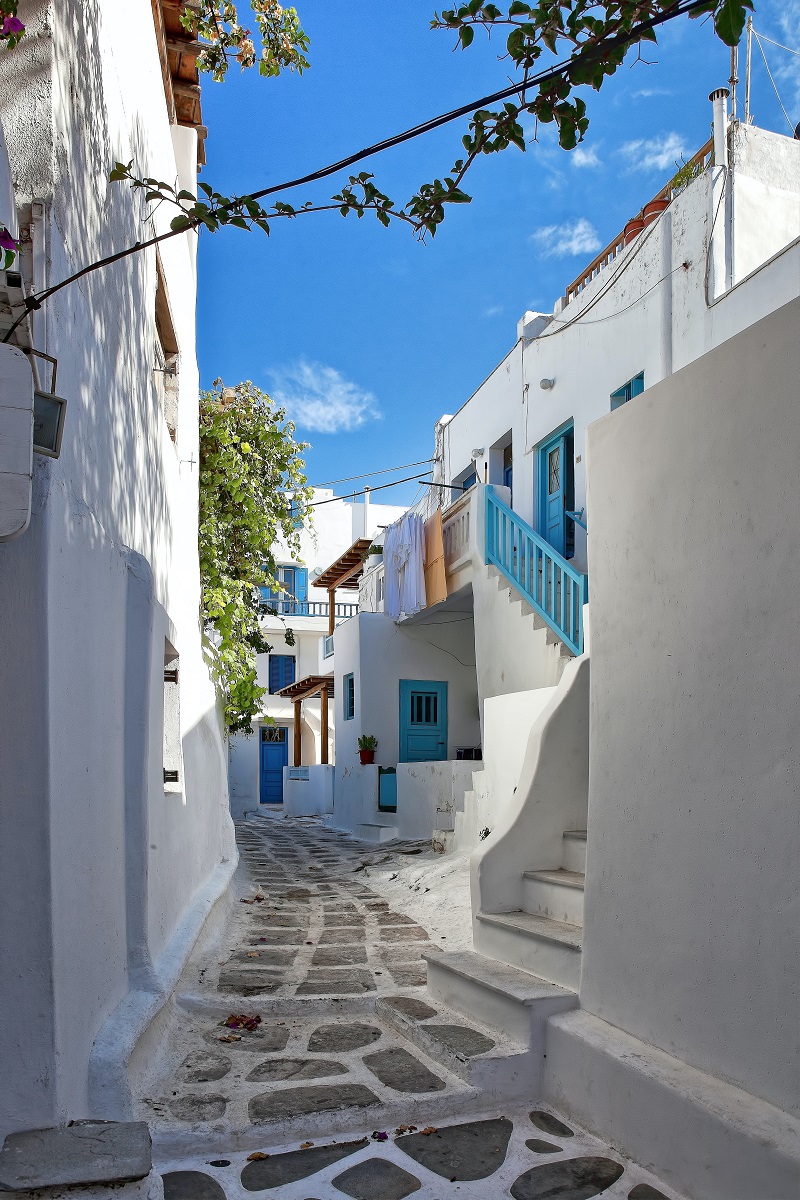 Whilst you should feel comfortable as a gay traveller anywhere in Mykonos, there are certainly some areas where the gay scene is more concentrated and well known – this is where we wanted to stay after all!

Mykonos town itself it where you will find the majority of all the main gay bars and clubs and hotels popular with gay travellers.

However, if you are looking for the gay beaches and gay beach clubs (including the infamous Jackie O’s), you will need to jump in a taxi a drive further afield. Check out our full Mykonos Gay Beach guide for more. 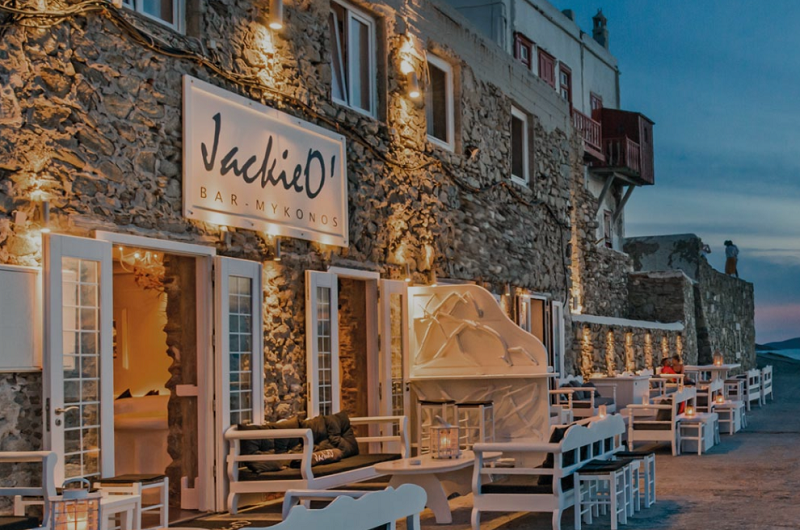 We love the gay bar scene in Mykonos, both during the day and late into the night.

On our very first night out I had to drag Ben back to our hotel in the end since we were sailing the next day! We were both having the time of our lives and he did not want to leave!

During the day one of the best gay bars would have to be Jackie 0’s Beach Club. What more could you want than sitting back with a cocktail by the pool admiring all the guys parading around?

When it comes to ‘actual’ gay bars in Mykonos, there are 4 that are considered to be the main gay bars, a couple that mainly attract a gay crowd and one hotel bar:

Whilst this may seem like a short list, Mykonos is a small island so these bars get busy and have a great atmosphere in high season.

Everywhere in Mykonos will welcome you as a gay traveller with open arms, however if you are looking specifically for accommodation that is popular with the gay crowd check out the following options:

With it’s style and charm, Mykonos also has plenty of gay friendly luxury hotels, if you want to treat yourself take a look at: 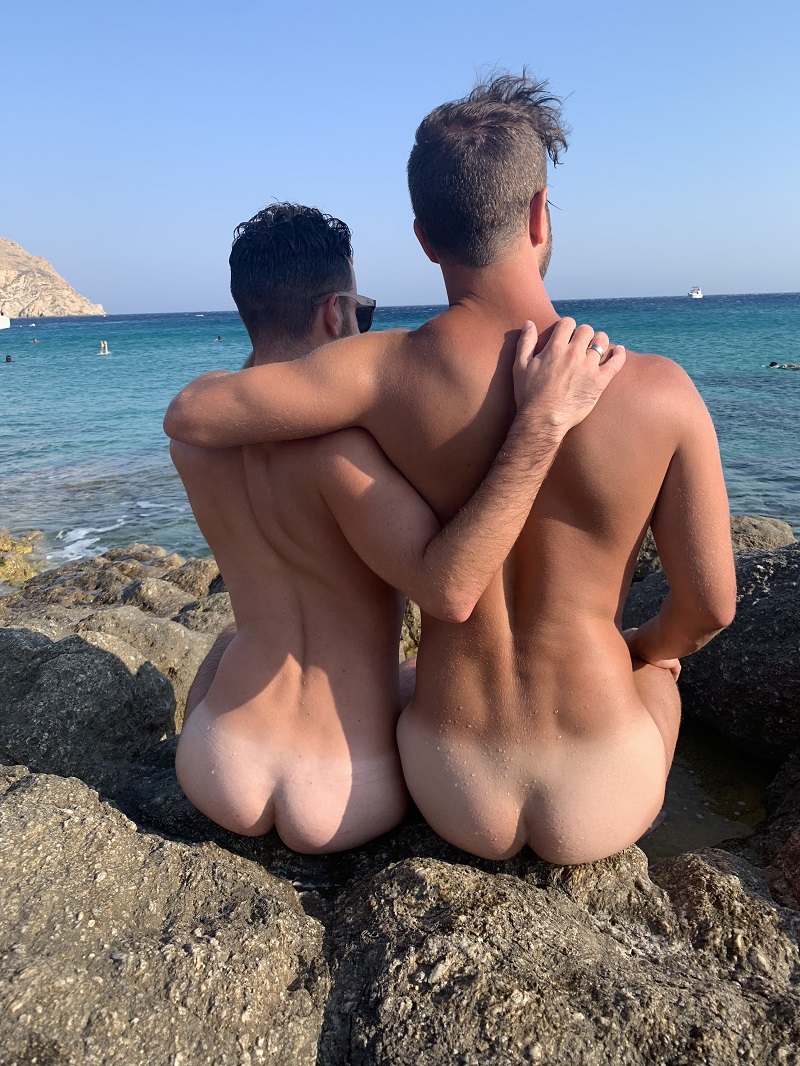 We loved the gay beaches in Mykonos although we did not know where to look, I had to tell Ben to put his tongue away!

Mykonos offers a few different options when it comes to gay beaches including of course a nude beach. Check out our full guide to the Gay Beaches in Mykonos for more information, however the shortlist includes:

Super Paradise and Paradise both have some beautiful beach clubs and places to eat (albeit very pricey).

All three beaches offer sun loungers but again it is worth noting these are quite pricey also at up to €45. 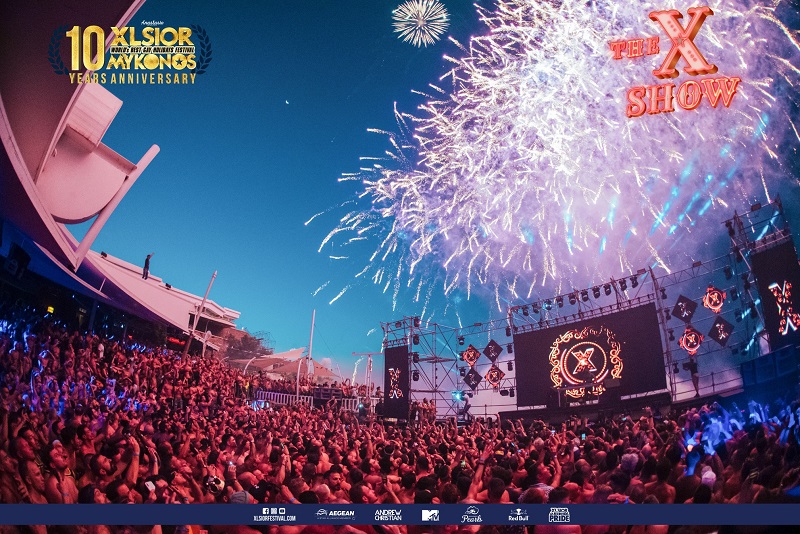 One of the most exclusive international Summer Gay Festivals in the world, Xlsior Mykonos is huge and attracts over 30,000 people every year. Try spotting us in the picture above!

We first went in 2019 and were overwhelmed by the incredible venues, entertainment, production, atmosphere and of course, the guys.

Check out ‘Everything you need to know about Xlsior Mykonos’.

What not to miss on your visit to Gay Mykonos 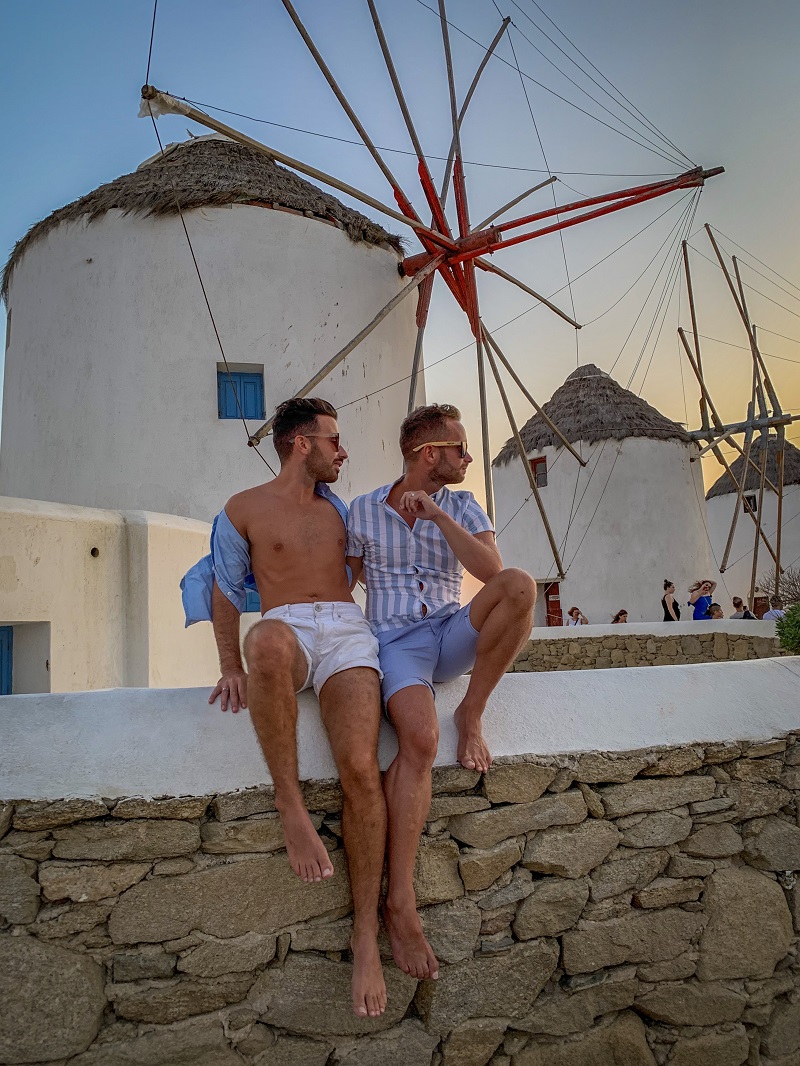 The top things to do in Mykonos are of course relaxing at the beach, eating and drinking but we would encourage you to try and tick of the following 5 things during your visit.

It may be one of the top gay destination in Europe, but there are currently no gay saunas in Mykonos. 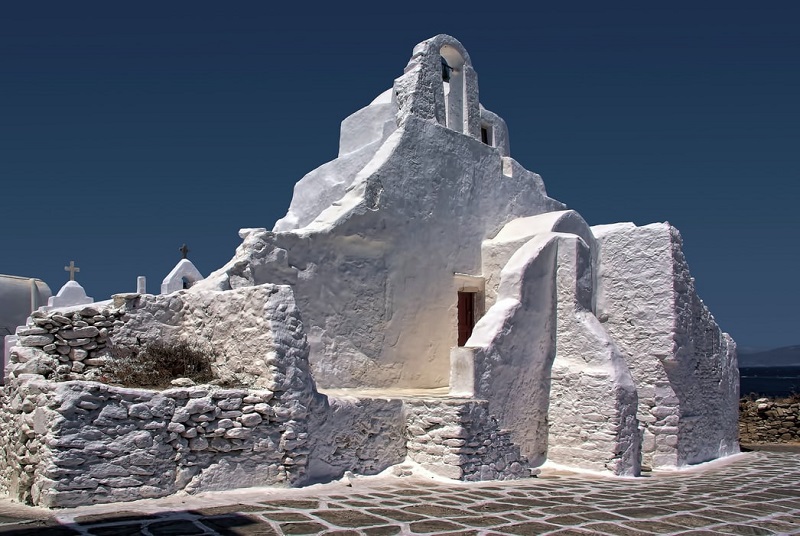 However there are some well known gay cruising spots, the most popular being the Church of Paraportiani (above) although don’t expect to find anything mentioned on TripAdvisor about that!

Mykonos is a natural addition to many group gay tours around Greece.

Other Useful Information about Gay Mykonos

In terms of shops aimed at gay tourists, head to ES Collection (one of our top ten favourite gay underwear brands) where you can pick up the latest swimwear and clothing.

What is the currency in Mykonos?

The currency in Mykonos is the Euro.

The public transport system gets a lot of bad press but if you plan it well, it is a very cost-effective way to get around the main spots on the island. Getting from Mykonos Town to Elia Beach was very cheap and straightforward.

However, many people opt for taxis as this is often quicker and more reliable (albeit more expensive).

A very common question, ‘is Mykonos expensive’? The simple answer is yes.

Mykonos is known for being a luxury destination and as such prices tend to be at a premium. For example expect to pay c €15 for a spirit and mixer and c€7 for a beer in most bars.

Weather and the best time to visit Mykonos

The best time to visit Mykonos (peak season) is between June and September. The ‘gay peak’ season is towards the end of August around Xlsior.

Throughout these months the weather is very warm and the sea the ideal temperature to jump into!

If you prefer a quieter trip, consider the shoulder seasons of May and October although there will be less places open but you will benefit from cheaper hotel rates.

We thoroughly enjoyed our visit to Mykonos and can not wait to return one day. Ideally, we would love to do the final couple nights of Xlsior followed by a week of relaxation, let’s see what next year has in store! 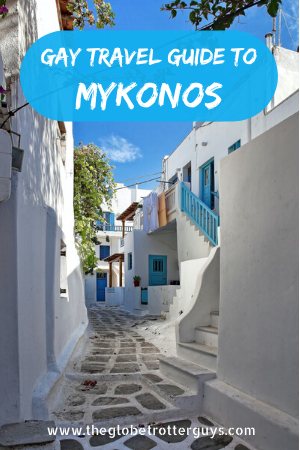