Gay Nicaragua? Like most countries we have visited in Central America, we knew very little about gay Nicaragua.

During March we took a 9 day organised tour through Central America. It was incredible, made our lives a lot easier and during the tour we were taken to some beautiful places including Laguna Beach Club which sat by the side of a volcanic crater lake.

Outside of the beach club we noticed the rainbow flag! We had to investigate further and managed to track down the owner for an interview to learn about gay Nicaragua.

Before we talk about gay Nicaragua travel, please introduce yourself to our readers:

My name is Stefan, I run a LGBTQ friendly hostel near a beautiful crystal clear freshwater lake in Nicaragua, my home country.

I’ve lived in my workplace for around 2 years now and have greeted hundreds of visitors each day. The place is called “Laguna Beach Club“.

Is Nicaragua gay friendly? What is the stereotypical view on the LGBTQIA community in Nicaragua?

It is normally ​misunderstood. ​

Our community is full of stereotypes: the feminine guy with high-pitched voice and the butchy woman who plays sports and doesn’t wear makeup, ​those are the basic images that most people have of homosexuals.

For them, a masculine gay man is unacceptable, the same goes for a feminine woman. You can pass as straight easily if you don’t fall into those categories as people expected to be homosexuals. Also pink clothes are associated with homosexuality in men.​

People still see the whole idea of homosexuality as immoral since our society is predominantly religious. Public displays of affection between homosexuals are still not seen well by most people, so it is highly avoided.​

What changes have you see over the years, whether this be law or attitudes towards LGBTQIA people?

It used to be a law that condemned ​homosexuality (as “sodomy”) but it was suppresed from the Penal Code ten years ago.

Nowadays, society is more open to the idea of homosexuality, especially straight women. Men are still ruled by the “macho” mentality and would do anything to avoid being labelled as gay (even if they are homosexuals, which means that a high percentage of gay men are still in the closet or married, even with children).

Overall, we have had a a lot of positive improvement in past years about how people perceive homosexuality, a lot of people have the position of “I accept it but don’t make me part of it”, and many others just don’t care. You can see homosexual people having normal jobs in almost any field as long as they are not very open about it (some are exceptions, specially in jobs culturally referred as gay, like hairdressers).

Is there a gay scene to be found anywhere in Nicaragua? Does ‘Gay Nicaragua’ exist?

There are 3 or 4 openly gay bars and discotheques in Managua (some are located in the same area so it is labelled as the gay area of Managua).​

Granada is a very gay friendly city in Nicaragua and you can see openly gay guys in the streets specially La Calzada.

The same goes for Masaya where gay guys will be left alone and not bothered. There is a folkloric festival in Masaya called “Baile de Negras”. This is where groups of couples composed of 2 men will go around dancing in the houses. One of them dressed as a woman which is a huge example of how people in this city accept the idea of a man that can be feminised or impersonate a woman. Most of the best dancers in town are very respected.

What advice would you give LGBTQIA travellers in Nicaragua?

The same advice as for straight travellers, avoid places that are not very touristic because of other problems like petty theft or pickpocket.

As I said before, locals will not be very positive about public displays of affection or very flamboyant behaviour, like holding hands in the street and even if they don’t say anything, they will give you a mean eye. Other than that, you can go around as you normally do.

Thank you so much to Stefan for taking the time to speak with us. This was an interesting conversation and we are starting to see similarities between countries, particularly around the ‘macho’ culture.

We would definitely recommend visiting Laguna if you are in Nicaragua. You can find out more on their Website, Facebook or on TripAdvisor.

Check out our other local interviews on Guatemala, Belize and El Salvador.

Lastly, we stayed in a Gay Friendly hotel in Granada, Nicaragua. It was beautiful and well worth a visit, take a look here!

Liked this post, don’t forget to pin it to help people learn about being LGBT in Nicaragua! 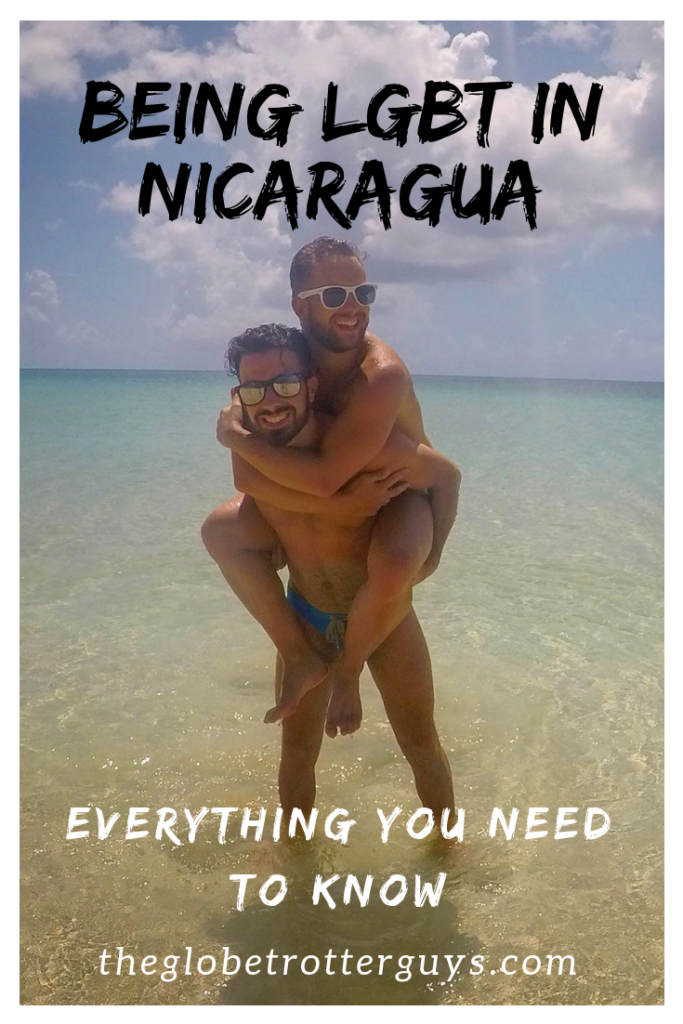 Note:  This post has affiliate links. You won’t get charged any extra for using the link but we will receive a small commission for each referral. Please note, all opinions are still our own. You are not obligated to use the link but we appreciate it if you do. Thanks.