Rome is iconic, bustling, shrouded in history with grand monuments, has incredible food and interestingly, has a long standing history when it comes to homosexuality…

It’s quite apt that our first visit to Rome was during Rome Gay Pride!

As a gay traveller coming to Rome, it has a fair amount to offer, perhaps not as much as other large cities, but it is sure to keep you entertained nevertheless.

We spent a week in ‘gay Rome’ investigating the gay bars, upcoming events, the best things to do, top travel tips, where to eat and everything in-between to put together our Travel Guide to Gay Rome. We hope you enjoy.

Italy as a whole is considered to be gay friendly with an increasingly liberal attitude from the public.

Of course, there are differences throughout the country and typically you will find that the more touristy an area, the more accepting they are.

It is fair to say that as a touristic and bustling city, we found Rome to be very gay friendly indeed.

We encountered no problems whatsoever and during our visit experienced Rome gay pride which was well received and widely celebrated!

We found that the gay scene in Rome was small and a little bit spread out across the city, especially when it came to late night club venues.

However, the main gay area in Rome could not be more central and can be found on Via di S Giovanni in Laterano which is seconds away from the Colosseum.

This area around the Colosseum has been a meeting point for the gay community since the 1960s and in 2007 it un-officially was given the name ‘Gay Street’.

There are a few gay bars that line this street as well as gay friendly shops and cafes. This is also where everything culminates during the annual Roma Pride.

Whilst this would be classed as the main gay area or street in Rome, don’t go expecting a huge scene like you may find in Madrid.

Expect a few very friendly gay bars and venues to hang out at with great views of the Colosseum instead.

As mentioned above, there are a few small gay bars in Rome along Via di S Gionvanni in Laterano (next to the Colosseum).

If you are looking for larger venues, then it’s more often the case that you will find a gay club night hosted at a club (rather than that club being an official gay club).

We visited Coming Out bar during Roma Pride and found that it was a great option to hang out during the day for drinks and food.

The food menu stood out with Paninis categorised into ‘Jock’, ‘Wolf’, ‘Daddy’, ‘Twink’ and so on. This put a smile on our face. Of course, there are plenty of pasta and pizza options on offer as well.

For drinks, this place is incredibly reasonable for Rome (Rome is expensive!).

Drinks range from €5 for an Aperol Spritz, a must have, to €6 for standard cocktails and €8 for something a bit more fancy.

In comparison, head into the posh tourist bars and you are looking at €10-20 for an Aperol Spritz.

When it gets later on in the evening Coming Out bar occasionally puts on events such as drag shows and nights dedicated to the 60’s/70’s/80’s/90’s. 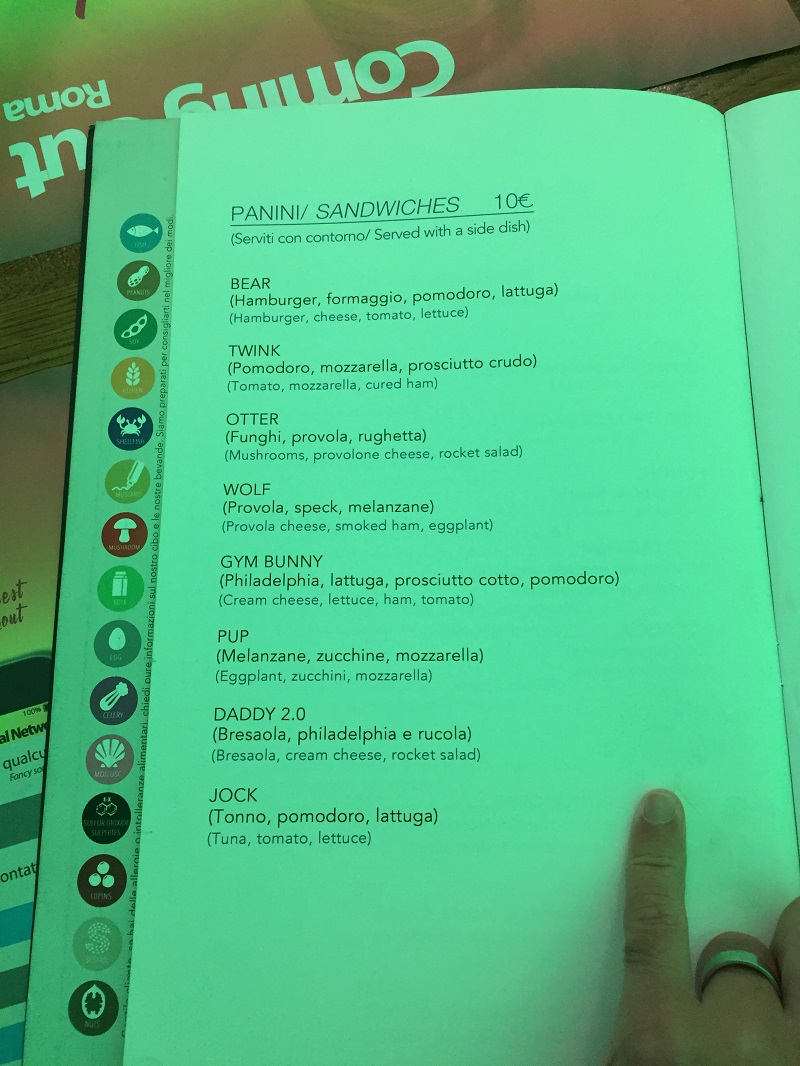 My Bar is next door to Coming Out bar on Via si S. Giovanni in Laterano.

This bar also offers food throughout the day before focusing on drinks later on in the evening.

When it’s busier at the weekend the bar has a small dancefloor and often holds karaoke nights.

Moving away from the ‘Gay Street’ and towards Trastevere you will find Garbo Bar.

Garbo Bar advertises itself as for gay, straight and quite simply for all.

Again you can come here for food or just for drinks. Probably one for a more relaxing evening.

Men2Men is a gay club night that tours all over Europe (not just Italy).

When it comes to Rome, the venue sometimes changes and can be a little bit out of the city.

The parties are normally held on a Saturday night and run through until the early hours of Sunday morning.

To see the next gay club night in Rome head over to their Facebook page and search upcoming events.

Muccassassina is a gay club night that dates back to the early nineties.

29 years later the club night is going strong and is hosted weekly at Qube which has multiple floors playing different music genres on each.

Expect huge productions, live performances, dancers and guest DJ’s every week. If you are looking for a big gay night out, this might be the one for you.

Head over to their Facebook page to see what is coming up. 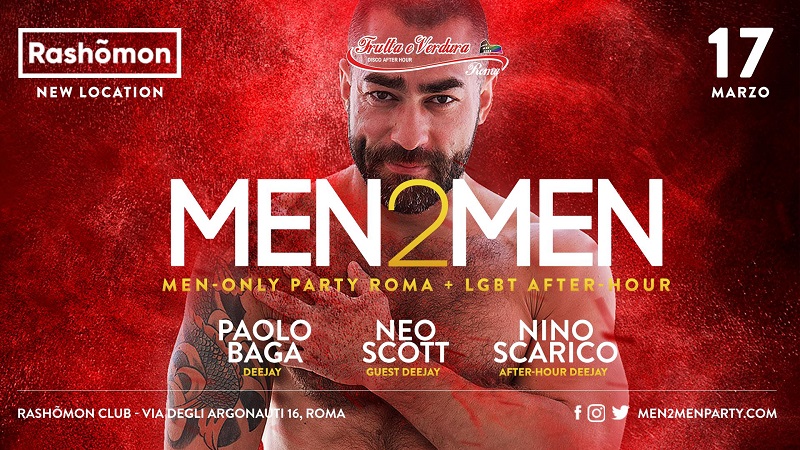 GIAM (Prison in English) is another long standing LGBTQ+ night and is held at Planet Roma.

GIAM runs every Saturday night at Planet Roma and during all Summer weekends at Love Park.

It brands itself as one of the most inclusive nights in Rome.

See what up coming up for this gay club night here.

There aren’t any ‘full on’ gay hotels in Rome as such, but like anywhere that is touristy you should be welcomed and some places are better known for welcoming gay travellers than others.

Here are some options to consider:

This is probably the closest thing to a gay hotel in Rome given that it is connected with Coming Out Bar.

With views of the Colosseum, this boutique hotel is well located for everything you will want to do as a tourist.

The rooms are very stylish and a good price considering how expensive Rome is!

Take a look at availability for B&B Second Floor.

If you are looking for a real treat take a look at Hotel Lord Byron.

This hotel is quite explicit on its website that it fully welcomes all couples and is gay friendly. This is always reassuring to read.

Hotel Lord Byron is listed on the directory for ‘Small Luxury Hotels of the World’. We have experienced another of these hotels in Central America and the standards to make this list are very high!

If you are looking for luxury in Rome consider staying here – it also sits at #90 of over 1000 hotels in Rome on TripAdvisor.

Take a look and book here.

New as of 2019 this luxury 5* gay friendly hotel is a winner when it comes to location.

The hotel is next to Villa Borghese park, near the Spanish Steps, Trevi Fountain and a short metro ride to the gay nightlife.

The hotel itself is beautifully decorated and offers some incredible views from its La Terrasse Cuisine and Lounge.

Expect all the mod cons in your room from Hermes amenities to Bose sound systems.

Find out more and book here.

Finally, if you would prefer something simple and homely Epic Home Rome is centrally located (near the train station) and offers 3 rooms with private bathrooms in a refurbished historical building.

The rental is specifically listed as gay friendly and if you just want a well located and cheap base while in Rome, this could be a good option.

Rome has more gay history than you may expect and you can book a gay tour through Get Your Guide.

If you want to know more, take a look at this gay tour of Rome below for more information:

Gay Pride in Rome takes place in early June with events throughout the week leading up to the main pride parade taking place on Saturday.

The pride parade normally starts at Piazza della Repubblica and ends at Piazza Venezia passing by world famous landmarks including the Colosseum.

We recommend getting a spot near Coming Out bar near the Colosseum so you can have a few drinks whilst watching the parade pass by. 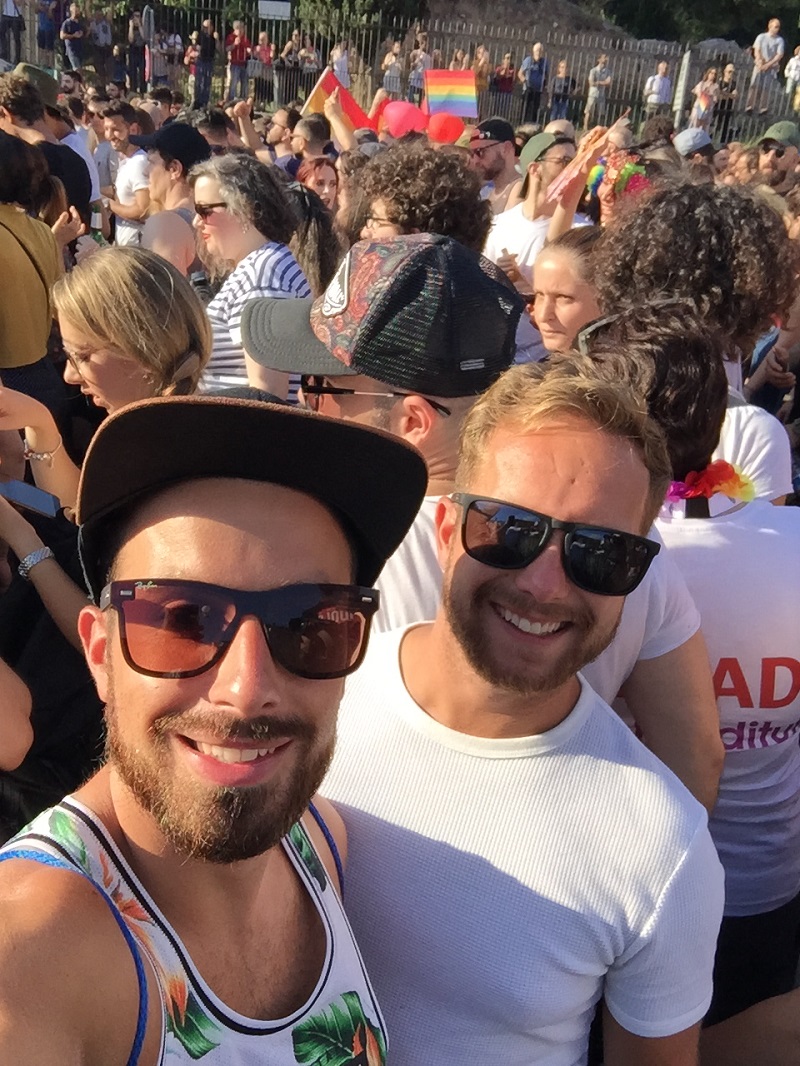 Where better to hold F*tish Pride Italy than Rome!

Each December Rome hosts F*tish Pride for 3 days of events, parties and shows.

It is the biggest event of its type in Italy and also incorporates film festivals, photo exhibits, stalls selling all the latest f*tish brands as well as parties for every niche.

If you are looking for the leather scene, Leather Club Roma organises a full weekend (Friday-Sunday) of parties and events. This is normally held early December.

The event has been going on for 11 years in total attracting people from all over.

The weekend starts with a welcome party on Friday, working through to the main event on Sunday night.

Head over to Leather Club Roma for more info.

To escape the intense summer city heat, many of the gay parties come together and set up shop outdoors in what is now known as the gay village in the Eur neighbourhood.

The Gay Village is part of Romana (Roman Summer), a city-sponsored initiative offering concerts and events in outdoor spaces throughout the city.

Quite simply, something for everyone. Find our more at Roman Summers website.

There are three gay saunas currently in Rome. For all make sure to take ID:

Illumined Sauna – open 24hours Friday 12pm until Monday 6am, this is a modern gay sauna with huge facilities including a 30 man finnish sauna, 50 man steam room and so on. Membership is ‎€16 euros and includes your first visit for 3 hours.

Europa Multiclub: This is currently the largest gay sauna in Rome. It is open 7 days a week and holds a pool party each Friday attracting a younger crowd.

Apollion Sauna – this gay sauna is well located between the Colosseum and Termini Station. It offers everything you would expect from dry sauna, to steam rooms, dark rooms and a bar to chill.

Our Top 5 things to do in Rome

Gay guide aside, there are many ‘must do’ things when you are in Rome. We only spent a few days but make sure you don’t miss out on: 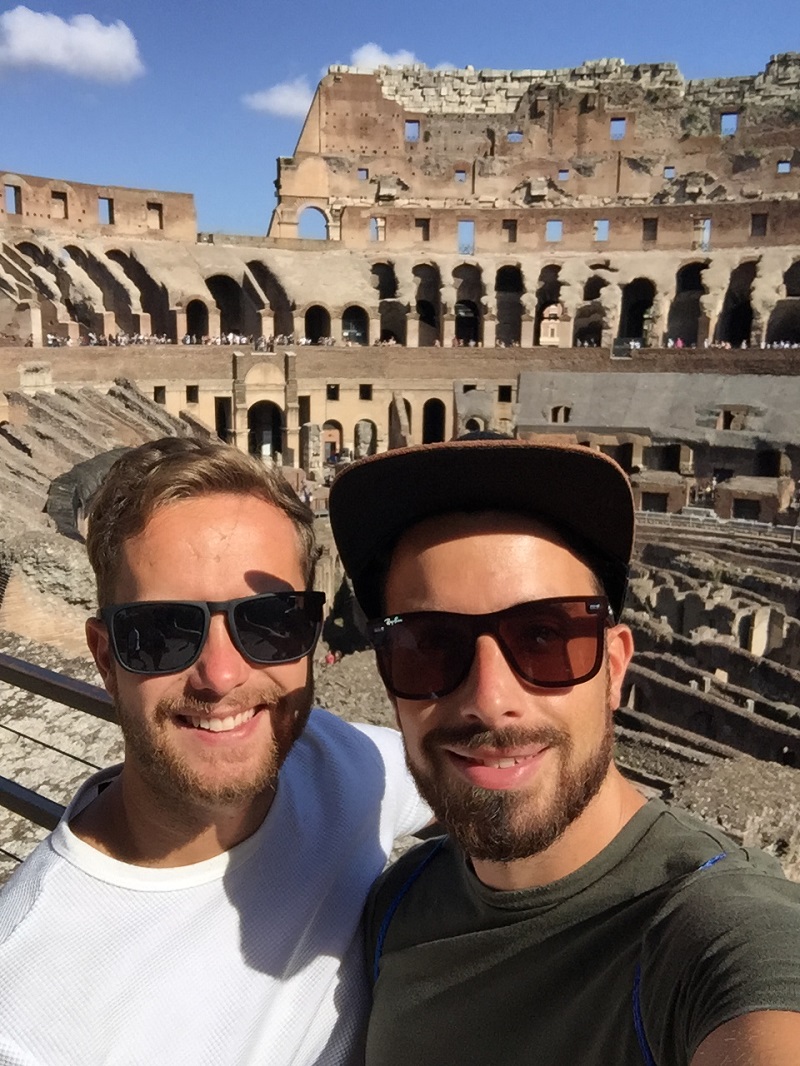 Of course there is so much more, including the obvious things including the Spanish Steps and visiting the Pantheon etc but the five things above are what really made Rome for us.

We didn’t make it to the Vatican due to time, distance and we knew it was going to be the height of season with ridiculous queues, maybe next time!

When to visit Rome?

This is a tricky one. So many people like to travel during summer (June-August) but it is very humid with little relief since it is a city.

We did end up visiting in summer and whilst we had a great time, we were constantly seeking shade!

In summer the number of tourists is at its peak so you can also expect a lot of queues.

We would suggest going either side of summer (April-May or September-November) when it is still warm and pleasant but with fewer tourists blocking your way.

December is March is quite cold so if you decide to go then, get wrapped up!

Other useful travel tips for Rome

To make your trip as easy as possible, here are our top travel tips and practical guidance for Rome: 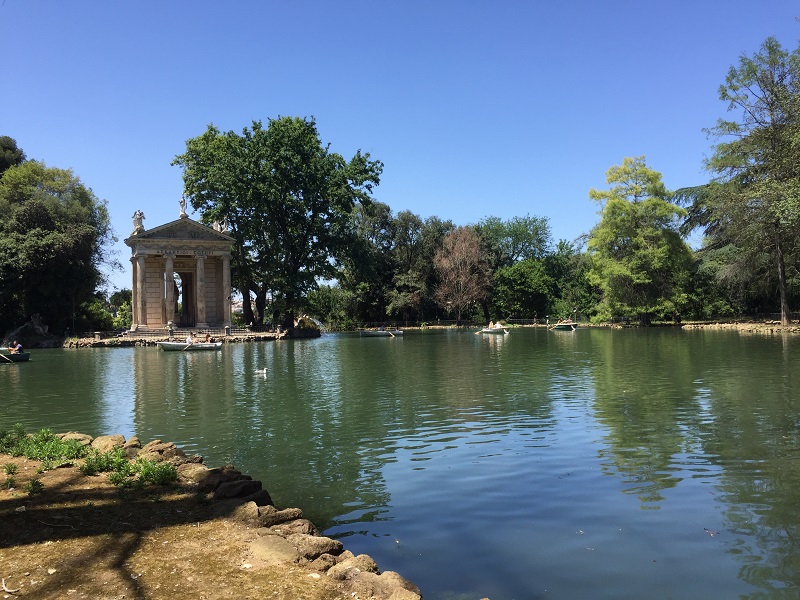 We really enjoyed our time in Rome. There is definitely enough to do to warrant another visit at some point.

Let us know if you come across any new gay events or gay bars etc during your visit. We hope you enjoy Rome!

Pin this guide and save it for later. 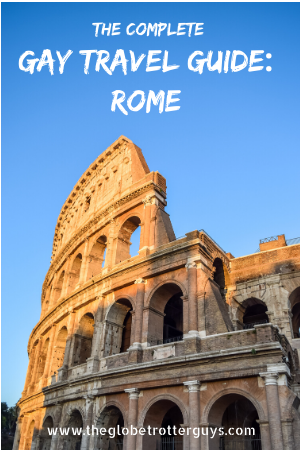 How to find the Gay Beach in Cape Town?

The Hottest Gay Resorts and Gay Hotels in Europe