Slovenia has blown us away! You have to add it to your gay travel list straight away!

We arrived in Slovenia as part of Pink Week. This was a 4 day tour of Slovenia in a gay friendly environment organised by gay owned travel company Luxury Slovenia and supported by the tourism board.

Slovenia is perhaps one of the most beautiful, scenic and green countries we have ever visited. Whilst most people will have heard about its neighbours, Austria, Italy and Croatia, we felt that Slovenia was less well known and deserves more attention!

But is Slovenia and its capital Ljubljana, gay friendly? From our experience as a gay couple, we felt very welcome and safe in Slovenia. We barely gave being gay in Slovenia a second thought; and that is a good thing!

In fact, it is stated on the tourism boards website: ‘’Slovenia, especially Ljubljana, is friendly and open to all visitors. As guests who are members of the gay and lesbian community, you are welcome here. All the services provided by Slovenia to its guests are also available to you.’’

So lets see what gay Ljubljana has to offer! 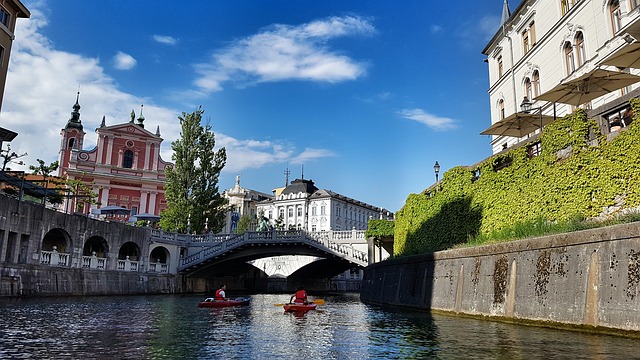 Like most countries, the largest gay community can be found in its capital city, in this case Ljubljana.

Here is a list of Ljubljana gay bars, events and festivals.

The gay scene in Ljubljana is fairly small but a lot of fun nevertheless.

Make sure you check out:

This appears to be the main gay bar in Ljubljana. It is super casual, some might say a bit of a dive bar!

However, the drinks are cheap, the music is good (from J Lo to the Black Eyed Peas and a lot of pop) and everyone is there to have a good time. Dress down, get drunk and dance the night away!

This is not a gay bar but holds the occasional gay night. We were lucky enough to be in Ljubljana for one of its gay nights and had an absolute blast!

For us the music was perfect being typical gay pop from Ariana to Lady Gaga and Whitney. Drinks were a little pricier and the entrance fee was €8 but all worth it!

The bar hosts regular LGBT events, talks, community get togethers and parties. Check out their Facebook page to see what is coming up.

Gay Pride in Ljubljana is hosted every year in June.

Pride here started in 2001 in response to an incident in Café Galerija. On 8 June 2001 two men were prevented from entering the café and told that they were not welcome because of their ടexual orientation.

The people’s response was to protest and over the next few Fridays, people would go to the café, take a table and sit and drink only water to reduce the owner’s profits.

One month later, a demonstration “Bypass against intolerance” was organised by LGBT activists and supporters which would later be remembered as the first annual Ljubljana Pride.

Each December there is a Gay and Lesbian Film Festival held in Ljubljana. Check it out if you visit during that time of the year!

If you are looking for advice or help while in Slovenia the following LGBTQ+ organisations are good points of contact:

There are two gay saunas in Ljubljana if that is your scene, check out:

District 35: This is the newer gay sauna of the two. It has three floors, a dry sauna, steam room and infrared sauna, private cabins, dark room and sun terrace.

Gymnasium: open since 2001, this was the first gay sauna in Ljubljana. It has a dry sauna, steam room, cabins, video area, rest-room and café bar. It also hosts occasional themed parties and events.

Marriage: No, they have civil unions for same ടex couples which have some but not all the rights associated with marriage and is not called marriage.

Adoption: Currently only step child adoption but full adoption is currently being discussed.

The journey to legalising same-ടex marriage in Slovenia was a complicated one. Back in 2015 a proposal was brought forward to change the definition of marriage to the ‘union of two’ not just ‘man and woman’. For a number of complex political reasons this was put to referendum and ultimately rejected. Why get involved in anyone’s else’s marriage but your own is beyond us but lets move on…

In 2017 the Partnership Act came into effect which gave some spousal rights to same ടex civil unions. It did not give them equal marriage and specifically excluded the right to adopt or for lesbian couples to have in-vitro fertilisation. This effectively segregates same-ടex couples and stops them from having families. Many news outlets erroneously reported the Partnership Act coming into effect in 2017 as same ടex marriage becoming legal which has caused some confusion.

However, whilst this was a good step forward there is still  a lot of work to do.

Don’t let the politics of this all deter you from your visit, the reality and our experience with everyone that we met was a positive one.

Top 3 things to do in Ljubljana

Gay scene aside, Ljubljana is a beautiful town with a river, castle and friendly vibe. Make sure that you: 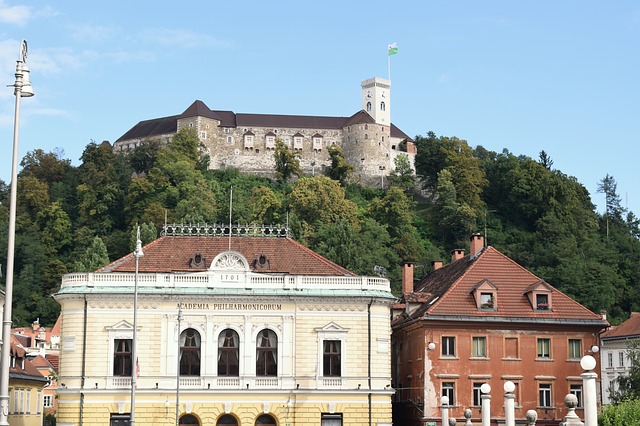 Where to stay in Ljubljana

Whilst Ljubljana may be the capital city, its not that big and hotels become fully booked quickly in high season so make sure you book early.

For the hotels below, we have either stayed at them ourselves or been on a site inspection to learn about the hotel and see the rooms before recommending them to you.

The Grand Union Hotel is set right in the centre of everything and we stayed here for two nights. The building is historical meaning that it has a more traditional style of décor.

Take a look for more information and book here.

The Central Hotel has recently been refurbished with a whole new concept which we loved. Here you can check in all through an app and use your phone to open you room – have as much or as little interaction with the staff as you want.

The rooms are all new, modern and stylish. If you are on a budget they even have capsule rooms which are a lot more spacious that you might think, we quite liked them! However, our first choice would be the castle view rooms.

Everything is well thought out, there is a rooftop terrace, complimentary hot drinks and they even have a laundry service with cocktails while you wait!

Take a look at their current rates and book here.

P.s on request you can use the gym and pool area at the sister hotel Grand Union.

Hotel Lev has a trendy retro feel to it. It has been refurbished recently with a lot of focus on the décor of the hotel. We also liked this hotel because it has a fitness area.

They also have a cool looking bistro in the reception area serving food and some very indulgent looking cakes!

Take a look at their current rates and book here.

Hotel Cubo is another centrally located hotel with a cool modern, minimalistic design. We stayed in a suite and the huge circular bed was incredible.

What stood out most at this hotel was the breakfast. They had a very wide selection with lots of exciting options beyond the basics that you usually get.

For rates and availability, look here.

The Intercontinental is the only 5* hotel in Ljubljana. We stayed here for two nights.

The rooms here are huge, stylish and have great views over the city. However for the best views of all, we enjoyed using the pool, jacuzzi and sauna area which had floor to ceiling windows.

Make sure you check out the rooftop bar here for a cocktail or two to start your evening.

Check out the Intercontinental and book here.

Where else to travel to in Slovenia

There is so much more to Slovenia beyond its gay friendly capital of Ljubljana! Take a look at our full Slovenia itinerary including Lake Bled below! 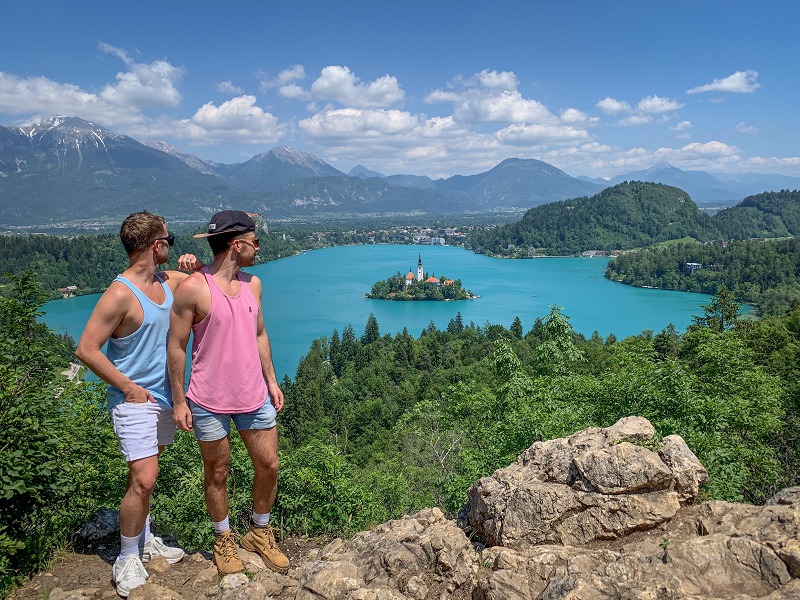 Regardless of who you are you need to go to Slovenia. We have had the best time and been astonished by its natural beauty, go here before everyone finds out!

Make sure you take a look at: 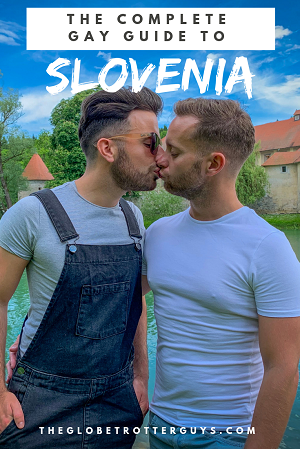 Note:  This post has affiliate links. You won’t get charged any extra for using the link but we will receive a small commission for each referral. We also were hosted by Pink Week and the tourism board during our stay, please note, all opinions are still our own. You are not obligated to use the links but we appreciate it if you do. Thanks.