Stockholm is one of those rare and beautiful places where you can openly be yourself without a second thought.

We spent 5 days exploring Stockholm and were very interested to find out what gay Stockholm had to offer.

Before arriving, we spoke to our friends and hosts at Stockholm LGBT to find out what we should expect as a gay couple in Stockholm.

They had nothing but positive things to say and explained that the LGBT community has been an integrated part of society for such a long time that it’s practically normalised.

Stockholm is known as the ‘open city’ after all and we found this was definitely the case.

Stockholm thoroughly impressed us so we have put together this Stockholm Gay Travel Guide for you to learn everything you need to know about gay travel in Stockholm!

To learn more about how to get to Stockholm, the major attractions, how to get around, the best restaurants, hotels and practical tips take a look at our complete guide to Stockholm here.

While the laws and rights for LGBT people in a certain country are not always reflective of the personal views the locals have, they are always a good starting point for understanding more about being an LGBT tourist in that country.

In the case of Sweden, we are happy to report that both the laws and personal views are very progressive.

In fact, Sweden is considered one of the most progressive countries in the world for LGBT rights!

Here is what you need to know:

As you can see, Sweden is ahead of the game when it comes to LGBT rights. These rights are also reflected in the personal opinions for the majority of Swedes.

Check out our interview with a local Swedish gay couple for their take. 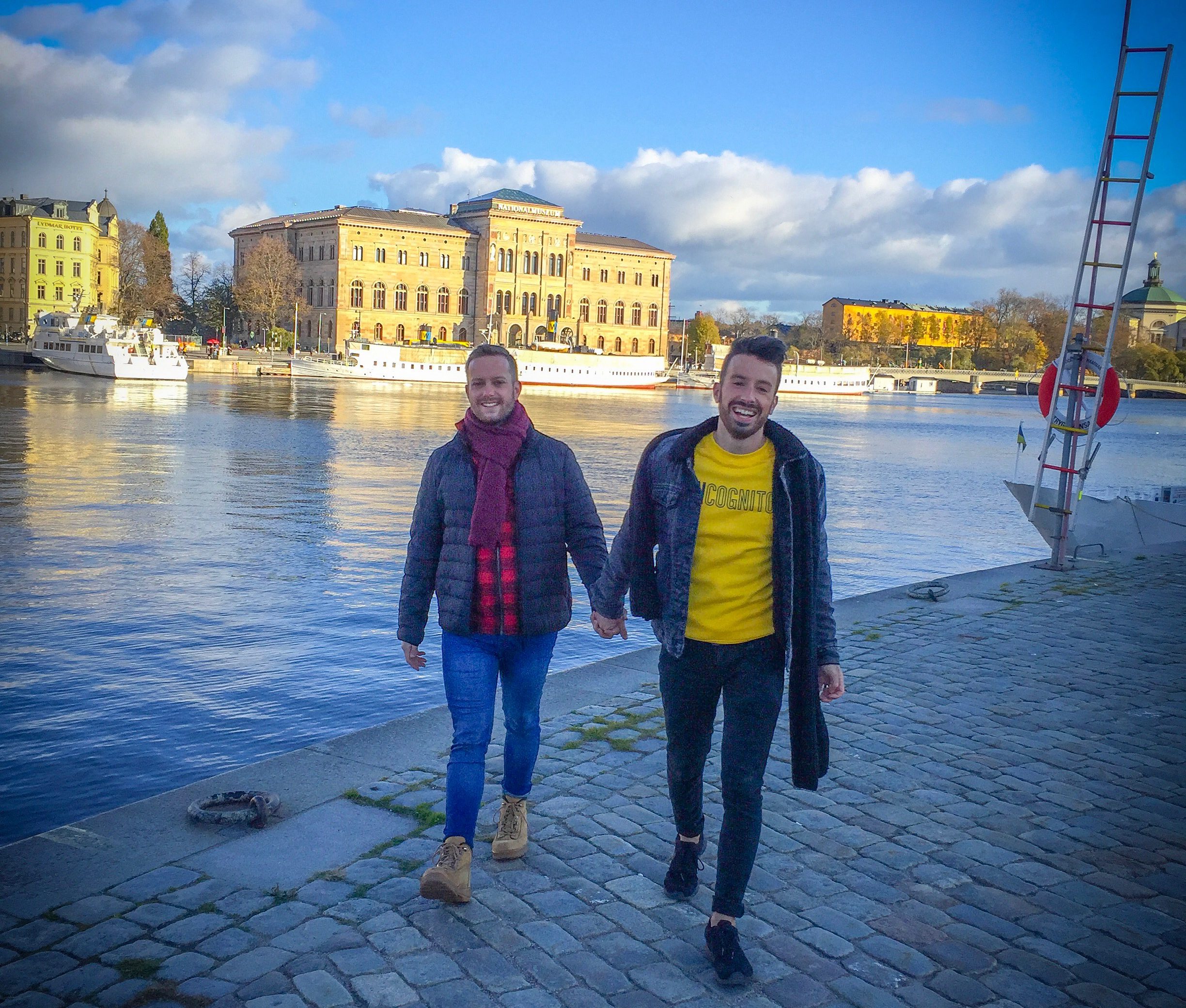 Where is the Gay Area in Stockholm?

Stockholm does not have a specific gay area or gay district.

However, it does have a number of specifically gay bars and clubs.

We believe that there isn’t a gay neighbourhood in Stockholm because the majority of bars are a mixed crowd, and very welcoming of LGBT people anyway.

The best way to explain this might be to take our hometown Manchester. Technically a very gay friendly city, but we would not feel very comfortable dancing together and kissing in many of the ‘straight’ bars there. We did not feel that was the case here in Stockholm.

During our time we went to the following Stockholm gay bars and would definitely recommend you check them out. Make sure to take ID, some of the bouncers can be difficult:

For a full list check out our separate mini guide ‘Best Gay Bars in Stockholm‘.

This is the place to be on a Saturday night.

It has been open since 2014 and has two dance-floors. Here you can expect to hear old school pop music (which we love) and also your modern pop and dance music.

When we went they had a themed night on for Halloween and everyone was in fancy dress.

They have some comical touches such as labels on the toilet doors ‘Top’ or ‘Bottom’ and they also have a station to pick up free condoms etc which is a good thing.

We really liked this bar, and again it’s one for the weekend.

It has multiple rooms – some for chilling, some for dancing, and if it’s open there is an underground room too.

Music here is mixed depending on what room you are in, and it mainly attracts a younger crowd. You can find Secret Garden in Gamla Stan.

During the day they also serve food here.

The bar is open everyday, and for a night out at the weekend it is open until 3am.

Club Backdoor markets itself as ‘the best gay club north of Ibiza’.

This is the place to go if you do not want your night to end at 3am.

Backdoor is open till 5am Friday and Saturday. On Fridays it plays hits, hip hop, RnB and 90s, Saturdays plays dark house and techno. This club can tend to attract more of the circuit crowd.

There are many other options depending on the season including:

This is one for the summer only. Patricia is a private yacht with four bars, a club and a restaurant. They hold an LGBT night here in summer on Sundays from 11pm-5am.

Blink and you will miss this bar.

It can be found next to a Scottish Pub in the district of  Södermalm, and you will recognise it by the small pride flag hanging outside. A small bar, it tends to attract regular clientele, being such a well established, intimate bar.

There are so many things to do in Stockholm (see our full guide here) and something we absolutely recommend is a walking tour with the first LGBT owned and run travel agency in Stockholm, StandOut Travel.

They offer everything from private walking tours, corporate events all the way through to organising weddings. If you want something specific, owners Erik and Sofia also work on lots of tailor made products.

StandOut travel are offering a 10% discount to our readers off – this also applies to their Webshop for their Abba Museum tour and the viking tour. When you fill out the booking form first type in ”Globetrotterguys” to get a discounted payment link.

Stockholm holds the largest pride in Scandinavia with over 500,000 attendees and over 45,000 people participating in the parade.

When you attend make sure to explore and experience three main things; Pride House, Pride Park and the Pride Parade.

Because of the open nature of the city, it’s not always a case of needing to seek out specifically gay hotels or gay friendly hotels in Stockholm – the majority of hotels operate this way because being welcoming to all is simply part of the culture here.

There are certain hotels that are more popular with LGBT tourists, such as Hotel Rival which we stayed at. Take a look at our hotel recommendations from our full Stockholm guide here.

There were two gay saunas in Stockholm, Texas and Bronx. Both were reported as closed from 2017 but it looks like they may be up and running again.

Texas Sauna/ Rainbow Sauna – It looks like this may now be the main gay sauna in Stockholm. The Facebook page for Texas Sauna has come back to life and it has updated it’s website to Rainbow Gay Sauna (looks like a re-brand). Find out what is happening on their website here.

Keep us updated if you visit any new Stockholm gay saunas please tell us and we can add to this guide!

Stockholm may not be a beach destination but in summer, the closest thing you will find to a gay beach in Stockholm can be found nearby on Kärsön.

This is a small island with a beautiful beach to the west of Stockholm. During summer, this can become a gay hotspot and known as Stockholms ‘gay beach’.

While this is a very hot topic around the world including the US and the UK, here in Stockholm it’s very normal.

During our time in Stockholm we came across many restaurants, shopping centres, hotels and attractions that only had gender neutral toilets. They probably don’t even use that term here, they seemed to just call them toilets because unsurprisingly, it doesn’t cause any problems and no one cares. We don’t have separate mens and womens toilets in our own households after all!

Examples that we came across included the most popular museum in Stockholm, the Vasa Museum, the Berns Hotel, and trendy restaurants like Riche.

You might think this is an odd section to have, but for us, it is all these little things that add up to make Stockholm a truly open and welcoming city.

We had heard of gender neutral clothing before but had never really been to anywhere that offered it. This is not a foreign concept in Stockholm by any means. There are many high end international fashion stores that simply do not have a mens or womens section. The clothing they create is quite simply for anyone that wants it.

Examples of these types of stores which can be found in the Bibliotekstan area include Hope (which labels everything with both mens and womens sizing) and Eytys which focuses on footwear but has expanded to new clothing lines.

For gender neutral fragrances, make sure you check out Byredo, also in the Bibliotekstan area.

This was really good to see because in our minds it’s a very simple concept. If you want to wear it, then wear it.

We had never thought about Stockholm as a gay destination but after going we can’t recommend it enough. It’s well established, has a strong history of progressive LGBT rights and is truly a beautiful city. You should visit any time of the year, but for us, we hope to visit again for Stockholm Pride!

We were lucky enough to visit Stockholm by partnering with Stockholm LGBT and Visit Stockholm. They hosted us, showed us the city and allowed us to experience everything the city has to offer. As always, our opinions remain our own.

For more about Stockholm and gay travel in Europe, check out: 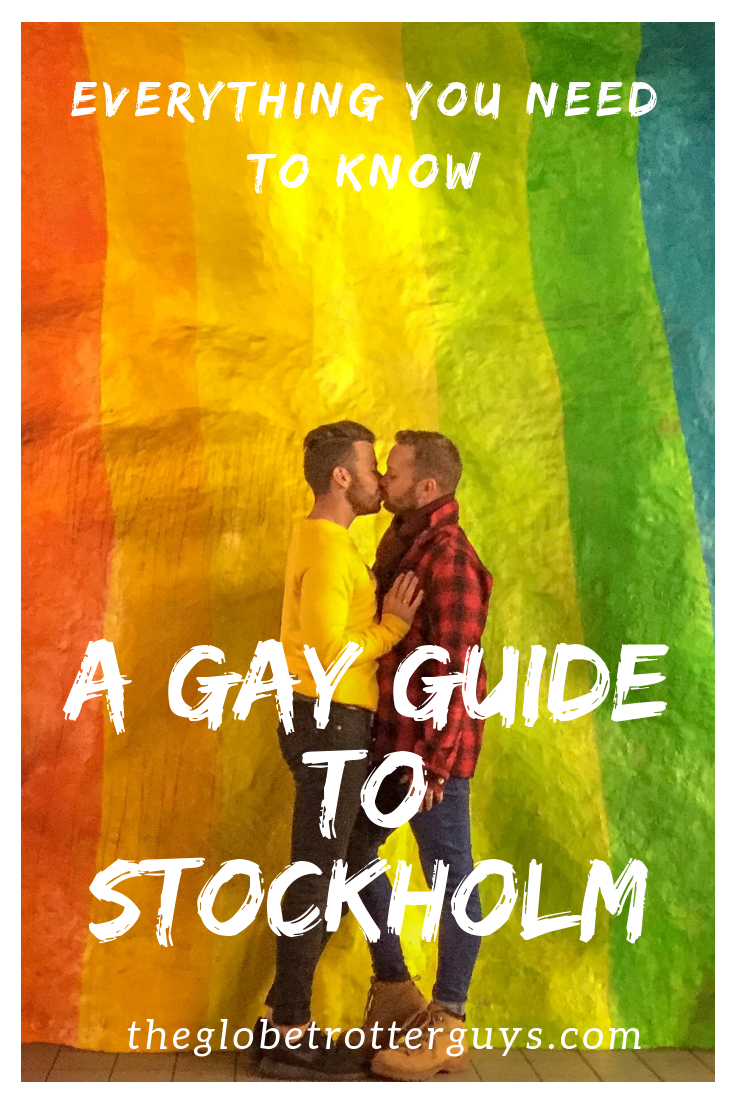 Some of the links in this post are connected to affiliate programs we have joined. If you make a purchase using one of the links, we get a small commission, at no extra charge to you. All opinions are of course our own!