Torremolinos is the gay hotspot of the Costa Del Sol. We knew plenty about other popular gay places in Spain like Madrid and Barcelona, but were very surprised to find out that Torremolinos also has a huge gay scene to rival these cities.

Torremolinos is on the South coast of Spain and is part of the Costa Del Sol – literally the ‘Sun Coast’. It’s been an incredibly popular tourist destination for years given that it is only ten minutes from Malaga airport, has hot weather for the majority of the year and beaches stretching all the way along the coast.

When it comes to gay Torremolinos, it has a very long and interesting gay history. Torremolinos was considered to be the liberal, hedonistic escape in Spain during the Franco era and it was here that Spain’s first ever gay bar opened back in 1962.

With this in mind, it starts to make sense why Torremolinos has eventually become a thriving destination for gay travellers with a lot to offer in terms of it’s gay scene.

Perhaps we were late to the party, but this was news to us!

We spent three weeks in Torremolinos and here is everything you need to know, read on for our Torremolinos gay guide: 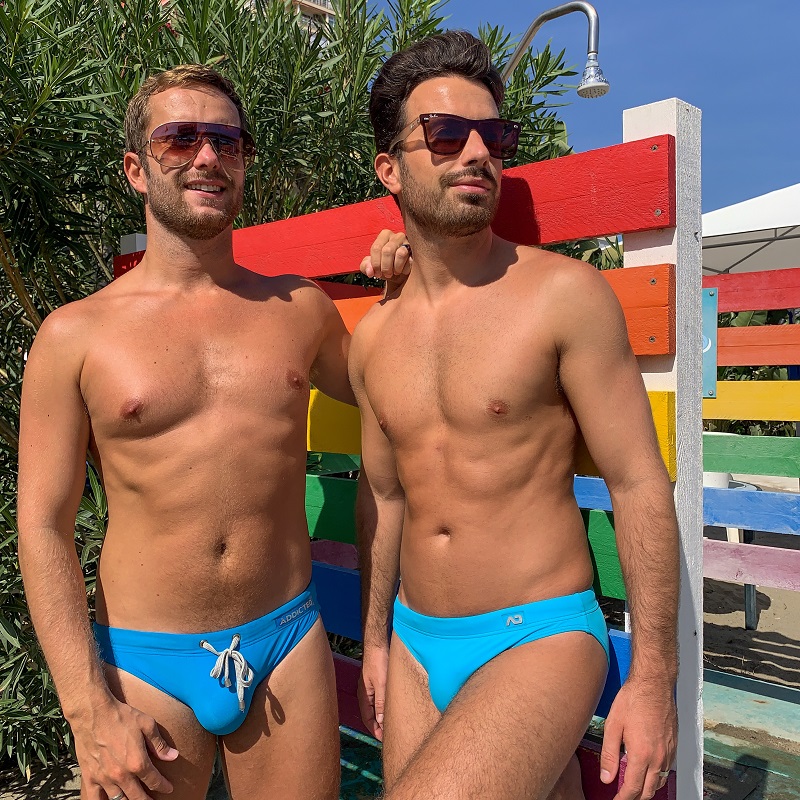 The main gay area of Torremolinos is very easy to find and is known as the La Nogalera area.

The gay area is just off Plaza de la Nogalera and forms a huge square of densely packed bars and clubs.

Just across the road from here off Calle Danza Invisible and Calle Casablanca is what we consider to be the second gay area. This has a few gay bars and cruise clubs but not as densely packed as the main gay area.

You then also have the gay beach area with two gay beach clubs, Eden and Paraiso.

Finally, there is also the odd gay bar or cruise club scattered around the town.

The map below indicates the three main gay areas:

The gay scene in Torremolinos is very liberal, open and creates an attitude of ‘anything goes’.

It’s also one of the most sexualised gay scenes we have ever come across which is no bad thing – we are pro owning your sexuality!

The reason that we say this is because we have never seen such a high density of cruising bars and clubs in one area. Most gay bars also have a small dark room or cruising area as standard. We have found this is quite typically a European thing, also common in places like Berlin.

There are plenty of gay bars, just a few places we would class as clubs you would dance at and then plenty of cruising clubs.

Take a look at our exhaustive list of Torremolinos’ gay bars and clubs:

The majority of these gay bars are all found in the gay area of Torremolinos, just off Plaza de la Nogalera. 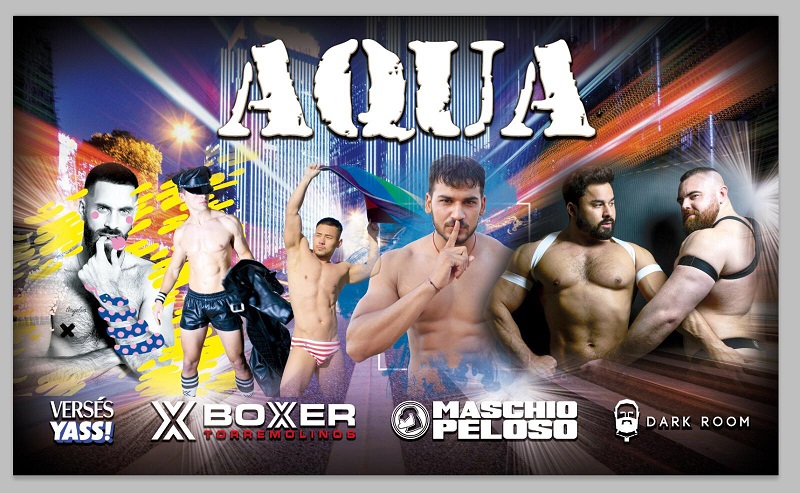 We only had so much time whilst in Torremolinos so we could only visit so many! However the list goes on, you also have:

After you have hit the gay bars, it’s time to move on to a gay club.

Tip: you are in Spain now, some of these clubs don’t open until 2 am and don’t get going until 3am/4am. Plan your night accordingly.

Like we said, most clubs and bars have cruising areas, but in terms of dedicated cruising clubs with everything you can think of, here are your options:

Torremolinos gay beach is very easy to find, it’s not hidden like many other gay beaches.

You can find the gay beach in front of two gay beach clubs – Eden Beach Club and Paraiso Beach Club.

Here is a full guide to getting to the gay beach in Torremolinos. 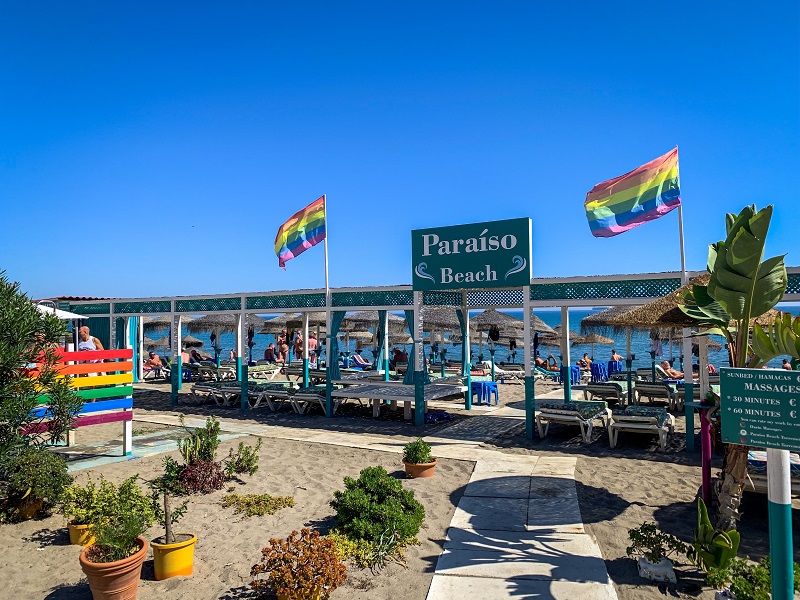 At the end of May/start of June over 40k people descend on Torremolinos for gay pride! For a small coastal town this is huge!

The festival lasts 4 days, with parties going on all day and night from the beach to the clubs.

If you can’t make the full 4 days, make sure you are there for the main parade on Saturday which starts at 6pm and finishes in the main gay area of Torremolinos where the party will continue.

Delice Dream is a huge gay festival held every April for 5 days.

Expect pool parties, beach parties and club parties that are going to take you through until 7am in the morning. We have been to Torremolinos a couple of times – sleep is a luxury!

In April it’s starting to get hot so it’s the perfect time to top up your tan and dance all day and night with hot guys from all over Europe. In 2020 they will be celebrating their 10th year.

Find our more at Delice Dream. 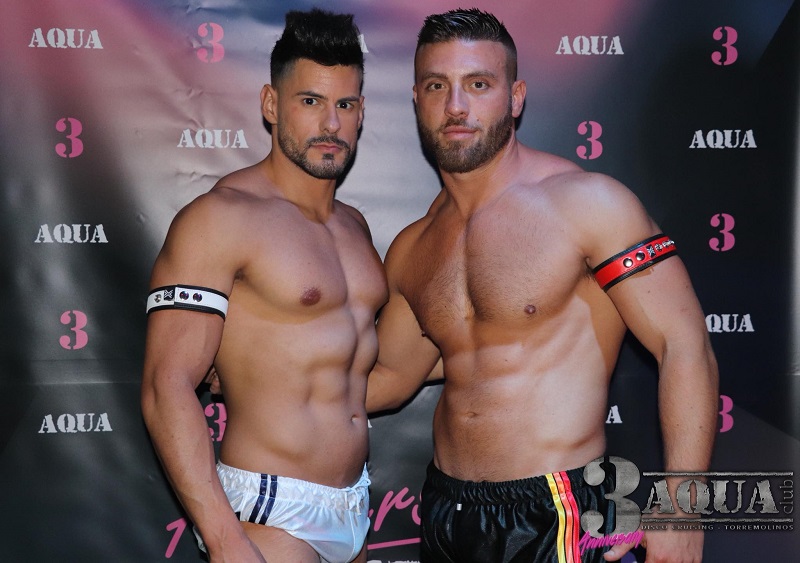 TLF began in 2015 and has now become one of the best known leather and fetish festivals in Europe with about 2000 attendees each year.

They run the main week in April and then also have some pre-parties in October. We were here during October and it was still really busy! TLF runs events every night across all the different cruising bars and clubs.

A whole week of pool, beach and club parties dedicated to the bear crowd. This event happens once a year in August and you can find out more on their website.

With all these gay bars you are definitely going to need something to wear! Check out:

There is one gay sauna in Torremolinos called Apollo Sauna Cabaret.

Like most gay saunas, it offers plenty of modern facilities including a Finnish sauna, jacuzzi, maze, private cabins and so on, but  guests can also enjoy drag shows, go-go dancers and steamy shows!

Apollo Gay Sauna Torremolinos also gets involved with some of the gay events in Torremolinos and held an event this year for the TLF festival.

General entry is €11, however sometimes they have deals on certain days for €9 or €5 for certain age groups.

Spain is a very gay friendly country and you should not expect to have any trouble as a gay traveller in any hotel. We have never had any problems at all.

These are the hotels we recommend based on our experience, recommendations from friends and research.

Ritual is the biggest outright adults only gay hotel in Torremolinos. It has a modern, large pool area with jacuzzi. You will also find a sauna, Turkish bath, and a nudist sunbathing area on the rooftop if you want an all over tan.

It also overlooks the beach front and is a short walk into town. If you come to Torremolinos for any of the parties, this is the place to stay.

Another adults only hotel near to the gay area with gym, pool and rooftop bar.

The hotel offers bed and breakfast, half and full board.

This hotel has a rooftop pool, outdoor pool with sun terrace, gym & sauna. It’s well located near the beach and a short walk into town and the gay area.

You also have an onsite restaurant and spa if you really want to relax and not have to leave the hotel.

There are many more great options, you can do a full search for your specific dates below:

We really enjoyed our stay in Torremolinos, and after three weeks, could easily see ourselves spending an extended period here.

If you are looking for a gay beach break in Spain, Torremolinos is definitely a top contender. Beaches, sun, boys and gay bars, what more do you need?

Liked this post, don’t forget to pin it for later: 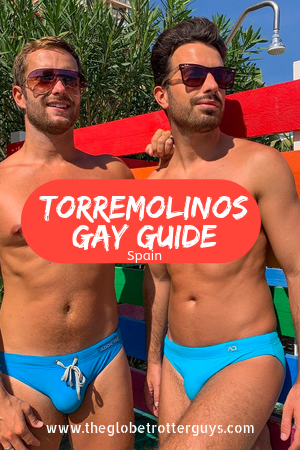 How to find the Gay Beach in Maspalomas, Gran Canaria (with maps!)