We lived in Madrid for 7 months and absolutely loved it! There is an abundance of gay clubs and gay bars in Madrid for every taste, so if you are looking to party until the early hours of the morning look no further.

Madrid is world renowned for its gay scene, and in fact hosts one of the largest gay prides in the world. It should come as no surprise that there are so many gay bars in Madrid as well as regular gay events and parties.

Where to find the gay bars and clubs in Madrid – Chueca

The main gay area in Madrid is called Chueca and is named after Federico Chueca who could be considered Madrids first gay icon.

The area spans about 1km north of Gran Via (one of the main streets) and east to west between Calle Hortaleza and Paseo de Recoletos. The main bulk of gay bars in Chueca are found within ten minutes walking distance of Plaza De Chueca – where the metro station is found.

Chueca is walkable from the ‘city centre’ (Plaza Del Sol) or just a couple of metro stops.

It is obvious you have arrived in the gay district given that the walls of the metro station in Chueca are painted floor to ceiling in rainbows! However, it’s not all about Chueca as you will find gay bars scattered all across the city as far as Lavapies.

Equally, when it comes to large gay events and parties in Madrid, the venues are sometimes scattered around but easily accessible.

When to go out in Madrid?

If you have travelled to Spain before you will know they do things differently here.

Whereas your night might start at 10/11pm in the UK or US, the main gay bars and clubs in Madrid are just opening their doors at 1/2am, getting busy at 3am and continuing until 6/7am in the morning.

Of course there are plenty of more casual gay bars open from earlier on in the night, but fundamentally, most people will be having their evening meal around 9/10pm and then start drinking and getting ready for their night out.

We highly recommend a siesta in the afternoon before a big night out! We did this a lot!

You will find it’s quite common that many of the bars will charge entry at a weekend, but more often than not this will include a drink (con copa/with drink).

The price of entry is usually very close to or the same as the price of a drink so you aren’t actually losing out, I think it’s more of a case to stop people just using the bars and not spending money.

Make sure you try tinto de verano and vermut while you are here. These should be c€5.

If you are drinking spirits the gay bars in Madrid charge c€7 in smaller bars to c€10 in a larger gay club/club night.

It’s worth noting that they typically free pour huge measures here so there is no need to ask for double measures!

We definitely had our favourite gay bars in Madrid. Here are the most popular gay bars and clubs you should head to in Chueca when you visit:

This is a late night (arrive from 1am onwards) club with 2 floors in Chueca. Delirio has been going for 15 years and is open every night (through till 05:30/06:00) making it one of the more popular places if you are out during the week.

Expect drag shows, Spanish pop and a busy, mixed crowd. Depending on what night you go, entry will normally include a drink (€10-15). 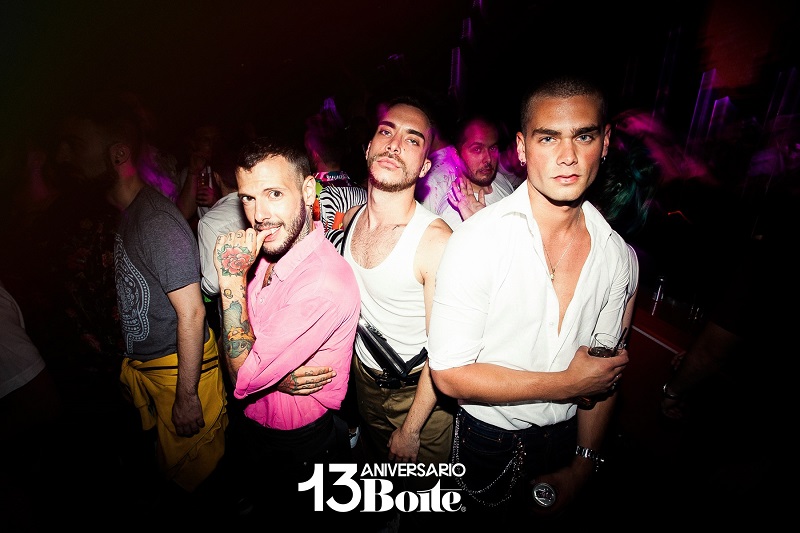 Boite offers a larger dancefloor than some gay clubs in Chueca and is open Thursday through Sunday, midnight until 06:00. 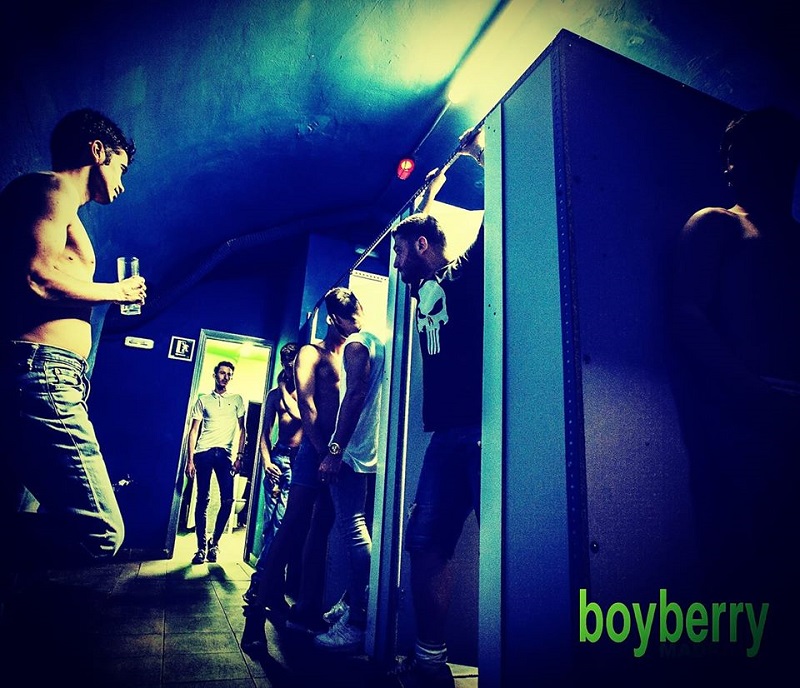 They have a small relaxed bar on entry that offers cheap drinks served by it’s particularly attractive staff. At either end of the bar are entrances to the multi-level cruising areas with plenty to keep you entertained.

As far as cruising bars go, this attracts a relatively young crowd.

Truco is right next to Chueca Metro Station and a good option for a casual drink earlier on in the night.

Depending on the time, it offers 2-4-1 on copas. If the square outside is busy, it’s a nice bar to watch the world go by.

Gris has friendly bartenders, cheap drinks and a fun atmosphere.

It spans across two levels with the lower level only getting busy at the weekend.

Expect a mix of music spanning from the 80’s onwards.

D’Mystic is a slightly more upscale lounge/café bar with a chic décor and relaxed atmosphere. One for a casual drink or to start your night before moving on to a club.

LaKama Bar is a cocktail and café bar known for it’s great service, handsome bartenders and good mix of music.

One to check out!

If you are looking for a drag show then check out LL Bar. The show usually runs 11:30 for an hour or so every night of the week.

Take advantage of the drinks offers here just before the show starts. 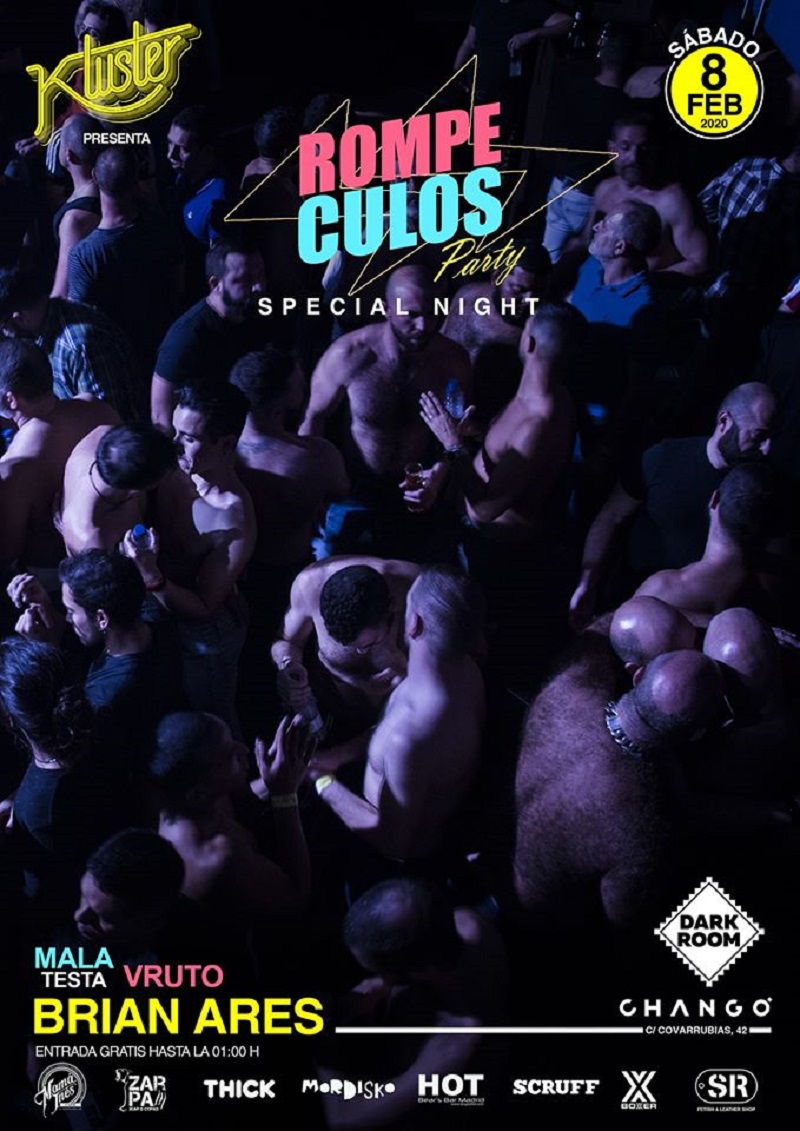 Kluster is one of the larger gay clubs in Madrid playing a lot of house and electronic music.

Very male orientated and attracting a circuit party type crowd so expect plenty of shirtless guys. It brands itself as the best Gay Club for men of Europe!

Hot is a gay bar which is popular with bears and more mature guys.

The Paso is a popular gay bar with a range of different guys. People enjoy the music here.

You will find a dark room at the back of the bar if you are looking to play.

Thick bar is a fun and cozy place to get your night started. Many describe it as a must go and it’s popular with the bear crowd!

Thick Bar is open Wednesday through to Saturday from 10pm onwards.

Part of the La Kama group, Baranoa is a cocktail lounge style gay bar with great music and very attractive staff in a trendy setting.

This bar is open every day and gets very busy at the weekends.

Madrid also regularly hosts huge gay nights at large venues (other than gay bars and clubs). For example, our favourite gay night in Madrid – Tanga – is hosted in a large theatre, Teatro Barcelo.

Make sure you head to the Facebook pages for the following gay nights in Madrid to see when and where their next events are being held: We could safely say that this is one of our favourite gay nights out ever and we highly recommend! We took every chance possible to go, even if it meant queuing during winter!

Tanga! is normally hosted in Teatro Barcelo, has a huge capacity and for us, the best music (mix of chart pop and Spanish).

Each Tanga! night usually has a theme based on an artist (whether it’s Ariana, Christina or Mariah at Xmas) with a big production of gogo dancers, drag queens and performers.

Tanga! is at least one per month on a Sunday. Because its Sunday the rules when it comes to timings change and people arrive at Tanga! from when the doors open around 8pm – if you arrive after 10:30pm expect a huge queue, this is a very popular night.

The night still goes on until 7am in the morning of course!

Churros Con Chocolate is similar to Tanga! in that it’s hosted once or twice a month on a Sunday at a theatre in Lavapies.

It is equally as popular drawing huge crowds, and unless you arrive in the first couple of hours of doors  opening, you can expect to queue for quite some time.

Expect a huge venue and lots of performances throughout the night. 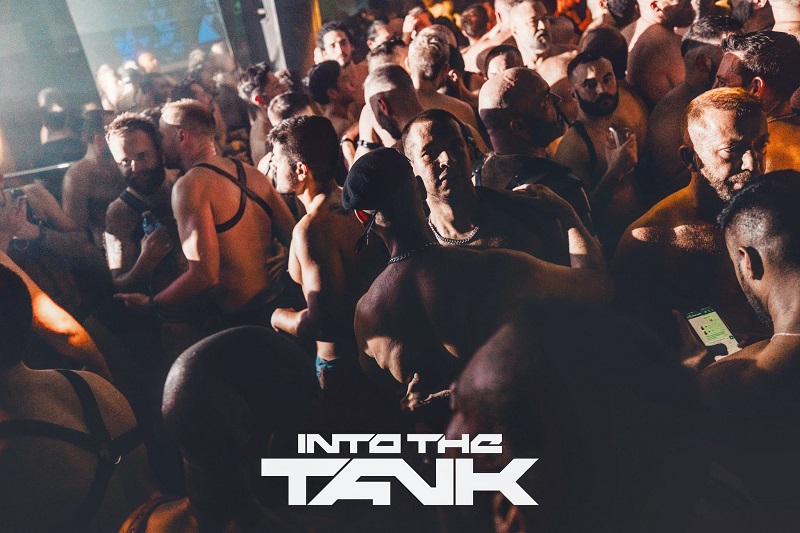 Described as an explosive fusion of energetic tech-house, powerful groove, and strong hard-funk in a gay masculine fetish atmosphere, Into the Tank runs monthly club nights.

There are other gay bars/gay cruising bars spread out in Madrid including a few in Lavapies.

Take a look at  The Ring in Lavapies and Firewood in La Latina.

With Madrid being such a gay haven, there are always new gay bars and clubs popping up. It’s one of the best places we have ever been for a gay nights out and we can not wait to return!

Let us know where your favourite places are! 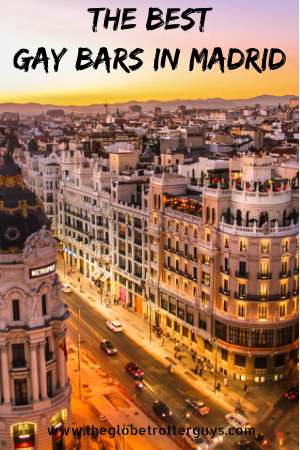