When it comes to Greece, Mykonos is the top gay destination to visit. It’s made our list of the top 10 gay travel destinations in Europe and for good reason!

We have fallen in love with Mykonos. Its reputation precedes itself and we found that it lived up to all of our expectations.

The narrow streets are immaculate in their iconic brilliant white and blue paint with cobbled walkways, its waters crystal clear and it has so many trendy places to hang out.

Of course, as gay travellers, knowing how gay friendly Mykonos is put us immediately at ease. We did not once have to think or hesitate about being open, holding hands or being affectionate with each other and when you are on vacation that is super important!

In this mini guide we will be covering the main Mykonos Gay Bars. This is based on our own experience but also on the experience from our friends who have been going twice a year for almost 20 years and really know what they are talking about!

We have also written a few other mini guides to help you out: ‘Gay Beaches of Mykonos’ and ‘What is Xlsior Mykonos really like’.

But for now, on to the gay bars of Mykonos!

It’s fair to say we have made it pretty clear that Mykonos is a safe haven for gay travellers. You can happily go out and be open in any bar on the island and its going to be welcoming and gay friendly.

When it comes to ‘actual’ gay bars in Mykonos, there are 4 that are considered to be the main gay bars, a couple that mainly attract a gay crowd and one hotel bar:

If you have heard anything about the gay scene in Mykonos then you will definitely have heard about JackieO’.

This is one of the most iconic and popular gay bars in Mykonos. During the summer you can expect JackieO’ to be packed wall to wall with hot guys.

The bar is not huge but does span over two floors. If you come here earlier on in the evening it’s the perfect spot for a chilled cocktail with views out to sea (the bar is on the seafront).

Come midnight onwards and in high season JackieO’ turns in to a big gay party with a good mix of music.

Moving on from JackieO’ at the night gets later, many people move onto our next Mykonos gay bar: Babylon

Again, its very popular in high season, with drag shows, a mixed crowd, theme nights, go go boys and a party to take you through to the early hours of the morning!

It also happens to be a good spot for sunset if you can get a seat earlier on in the evening on the outdoor terrace.

Lola’s is run by a Greek and a French guy and is a good place to start before your night gets to crazy.

It’s a small, more intimate bar to sit, relax, have a cocktail and catch up with friends before heading to a busier party. The décor is pretty cool in here to!

We really enjoyed our cocktails, especially the Moscow Mule. When we went in August 2019 the cocktails were c€14.

The At54 gay bar is known especially for its live shows and drag performances.

They have weekly parties, and like everywhere in Mykonos attract a very hot crowd.

At54 is also open during the day for you to enjoy the outdoor terrace and once the sun sets you can move inside the club to party the for the rest of the evening.

People talk very highly about the music here, so if you are looking to dance, check this place out.

You can find At54 Club at Manto Square Mýkonos, Kikladhes, Greece.

This was one of the longest running gay bars but unfortunately has closed after 33 years in business.

This is another cozy gay bar in Mykonos offering chilled early evening drinks and music before becoming a party stop later on in the night.

The DJ will playing all popular music genres from house, to tech house, funky, disco, R’n’B, 80’s, 90’s and RnB Pop House. Porta Bar prides itself on its parties, themes and entertainment!

Our final bar can be found at the gay hotel, Elysium.

It’s bar and terrace are open to the public and is very popular for watching the sunset with drinks and a sunset cabaret show. For some people this is a tradition and an absolute must when they come to Mykonos! 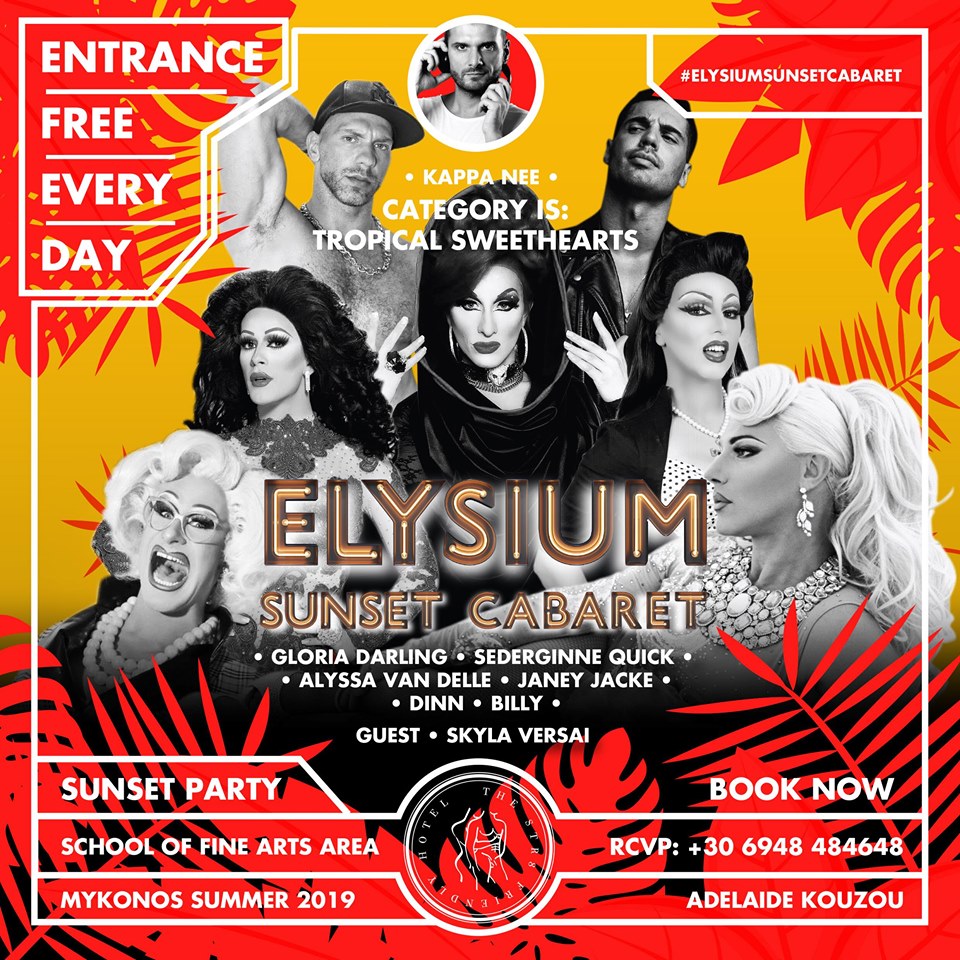 This may not seem like a huge list compared to the likes of Berlin for example, however Mykonos is quite a small town so this is actually quite a high concentration of gay bars. Either way, you are sure to have a lot of fun, we certainly did!

Beyond the nightlife, make sure to explore the island itself. It is a beautiful destination and we know you won’t be disappointed!

Let us know if any new gay bars pop up in Mykonos during your visit and we will add them to our list!

Lastly, being such a small island, accommodation can book up quickly so make sure to take a look in advance.