Ask any backpacker travelling through Central America about Belize and they will tell you Caye Caulker is on their list.

Google it for yourself and you will see why. Bright blue skies, clear blue sea, palm trees lining the waters edge and colourful houses dotting the street give the island its iconic Caribbean feel. There are so many things to do in Caye Caulker!

Stepping foot on the island you’ll immediately see the famous signs advising you to “Go Slow”. In fact, you’ll also hear the local villagers saying this numerous times a day as the answer to many questions asked. It’s the local way of saying “don’t worry, just chill out.”

But is life on Caye Caulker all about just going slow, or is there enough to fill your time there? Whilst we love a stunning Caribbean island as much as the next person, it doesn’t take long before we get itchy feet and need to do something!

How to get to Caye Caulker

Belize is bordered by Mexico to the North, and Guatemala to the West. It is easily accessible from both countries overland if flying is out of budget. Getting to Caye Caulker from either country will involve bus travel to either Chetumal, Mexico, or Belize City if coming from Guatemala. Then you will take a water taxi to Caye Caulker.

We were travelling from Playa del Carmen, so we took the ADO bus to Chetumal, and then a taxi to the ferry port. This is where you pay your departure tax for Mexico and stamp out, and check in for the water taxi to Caye Caulker.

The main company operating this route is Belize Water Taxi. Whilst there may be other companies online, we would strongly recommend BWT. The whole process from check in, travel, to collecting our luggage at the other end was seamless. The company running this make sure you know what is going on at all times.

Between Mexico and Caye Caulker, the water taxi calls at San Pedro, Ambergris Caye. Everyone disembarks, and collects their luggage. You clear Belizean customs at this point, and pay your $2.50BZD border fee. Then, it’s back on the water taxi with your luggage for the final stretch through to Caye Caulker.

Caye Caulker has heaps of accommodation options for such a small island. There are over 50 small hotels and guesthouses, and plenty of hostels and private rentals. Accommodation is not quite as cheap as were expecting, but it is a Caribbean island!

We opted to stay at the Drifted Coconut hostel as the price of their private rooms was very comparable to dorms. The hostel was in a great location, just off one of the main streets. Breakfast was included, and there is free rum punch on an evening between 8 and 9:30pm! However this no longer exists!

Top Things to do in Caye Caulker

As usual, we spent our first morning getting our bearings and exploring. Caye Caulker is only 5 miles long north to south and less than a mile wide so this didn’t take too long! In some spots you can see the sea on the east and west coast at the same time, its that small!

There are many places where you can hire bicycles, but we chose to walk. The “main street” runs along the beach front. This is where most of the bars and restaurants are found, while the accommodation options are a little set back.

At the North of Caye Caulker, you’ll find the Split. This is where initially the island was “split” in two by Hurricane Hattie in 1961, but the passage was made larger by dredging the area. It has now become the islands most popular place for swimming, chilling, or taking part in water sports. Here you’ll find the Lazy Lizard bar – probably the most popular daytime backpacker hangout on Caye Caulker. Next door there is also Sip n Dip, a reggae bar with hammocks, swings, a volleyball net in the water or tubes to float whilst sipping your rum punch.

We did venture down to the South of Caye Caulker, but there wasn’t much on offer down here. This is mainly private residences, and a lot of mangrove swamps and forests.

One thing that struck us not long after we arrived was the lack of actual “beaches”. Due to the islands location near many mangroves there is no beach like we were expecting to find on a Caribbean island. This is probably why many people hang out at the Split.

However, Koko King is a fantastic establishment on the other side of the Split. This is pretty much a mini-resort, offering your (man-made) white Caribbean beach, a pool (for an additional charge), restaurant bar and lounge, sun loungers, inflatables in the sea, and inner tubes to relax in. Best part of all is that there is a regular water taxi from Caye Caulker that is free provided you spend $10BZD/$5US whilst at Koko King. A couple of rum punches, done.

We spent a great afternoon just relaxing here and making use of all the facilities. Check out their Facebook page for more info.

When you’ve had enough of “going slow” on Caye Caulker itself, venture off on one of the many excursions.

Caye Caulker is found off the Mesoamerican Barrier Reef, which is the second longest in the world. This means that the local area is filled with snorkelling and diving opportunities. You can also book day trips in search of the elusive manatee, found due to the abundance of mangroves. There are water sport excursions, fishing trips and trips to nearby islands.

We booked a day trip to Hol Chan Marine Reserve, which is the most popular snorkelling spot on the Reef. As this particular area is thriving with marine life, over 35 years ago it was declared a Marine Reserve, meaning that no fishing is permitted. Our trip was a full day sailing tour, inclusive of 3 snorkelling spots with full face snorkels (like this snorkel mask), two within the Reserve itself. Our favourite by far, Shark & Ray Alley. The name is pretty self-explanatory – the spot is full of harmless nurse sharks, and southern stingrays. We even saw a couple of turtles too – we didn’t know where to look! Check out our video of the experience.

Lunch was included, and on the ride home the crew “forced” us to drink rum punch! The boat then dropped us at Koko King to enjoy sunset, play some volleyball, and drink more rum punch!

We chose to book with Ragamuffin Tours due to their incredible TripAdvisor reviews, and can’t recommend highly enough.

Whilst we only snorkelled during our time on Caye Caulker, there was the opportunity of diving too. This would definitely be a great place to do it! If you’re an avid diver, you should also check out Hamanasi Dive Resort, the best dive resort in Belize.

Our other must do activity whilst in this area was a trip to the Great Blue Hole.

After weighing up whether to dive, snorkel or take a scenic flight, we chose flight. We spoke to many people and read reviews and were told this is the best way to appreciate the “magnitude” of this Natural Monument. Diving is supposed to be incredible, but is also very costly, and once you are submerged, you could be diving anywhere! Surprisingly enough, the flight was the cheapest option, even over snorkelling.

How to get from Caye Caulker to the Blue Hole

Flights are chartered, and are either 3 seater or 5 seater planes. This means you pay for the full plane, and the cost is split between the number of people taking part. We were lucky enough to be able to find 3 other willing participants. We paid $200US each which included return ferry tickets to Belize City, a taxi at the other end to the airstrip, and the flight itself.

This particular activity had been on our bucket list since we planned to come to Central America, and it was so satisfying being able to tick it off. Without a doubt, it is one of the best things that we have ever done. The below picture does not do it justice! Take a look at our YouTube video here for a birdseye view!

We booked this with EZ Boy Tours, again due to their popular reviews.

Caye Caulker Honeymoon? One for the Romantics

Such a stunning location is bound to carry an air of romance with it, and we definitely picked up on this. Or this could also have been because we happened to be there for Valentines Day!

V-day apart though, along the beach front there are so many little bars, and cute little restaurants with swings for seats where you can sit and enjoy a cocktail with your better half. It’s the perfect romantic setting! No surprise that people choose to honeymoon here.

We felt very lucky to be able to celebrate our 9th Valentines Day together here, especially as it is the last day of lobster season! It might not seem like such a big deal to us, but after the 14th February Belizeans are not allowed to hunt lobsters until mid June due to mating season.

Lobster is a pretty new dish for both of us as usually it is so expensive. However on Caye Caulker due to the number of Caribbean Spiny Lobsters in the local waters it is surprisingly cheap!

We found a beachfront restaurant offering 2 whole lobsters, 3 sides and a cocktail each for a grand total of $60BZD. This is $15US each which we thought was a fantastic bargain! Such a nice coincidence that lobster season ends on Valentines Day!

So did we have enough to keep us occupied over 4 days? Absolutely yes. We filled our time doing exactly what we wanted to achieve, with plenty of time left to “go slow”.

Caye Caulker truly is a little slice of paradise, and we would advise anyone travelling through Central America to include it. 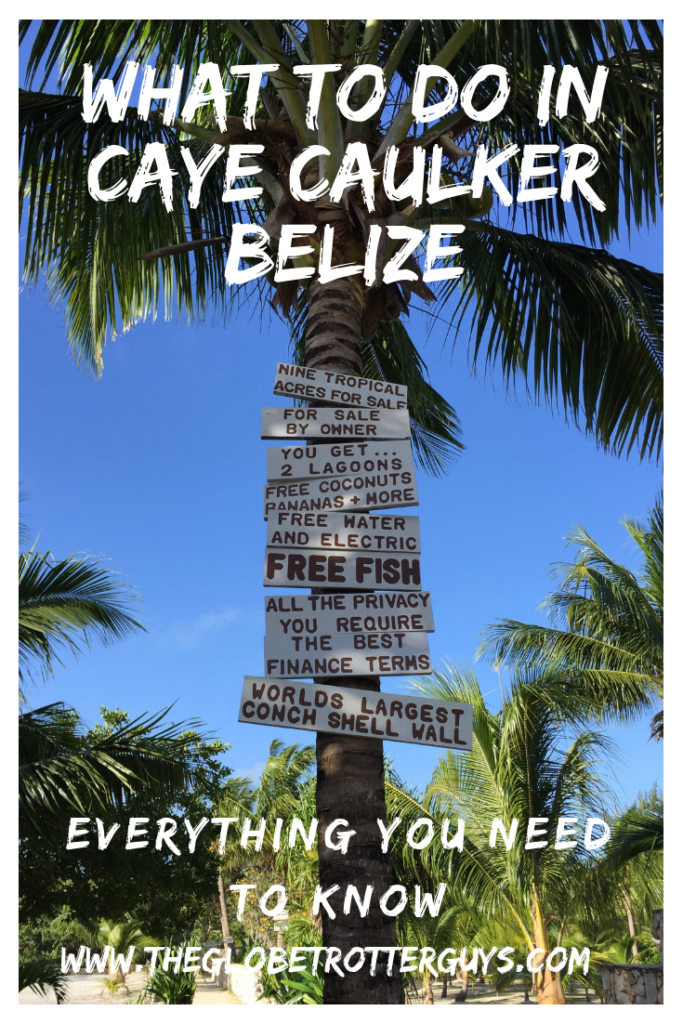 Want to know about LGBT life in Belize? Check out our interview with an LGBT local and with the organizer of Gay Pride Belize.