There are two gay beaches in Rio De Janeiro which can be found in the heart of the tourist centre and are both relatively close to each other.

Unlike most gay beaches around the world, these gay beaches in Rio De Janeiro are easy to find, there is no need to go hiking!

Both Farme Gay Beach (Ipanema) and Bolsa Gay Beach (Copacabana) have rainbow flags raised so it is clear where to find them.

The gay beaches in Rio De Janerio are known for being very social and a great place to spend the day drinking with friends, topping up your tan, showing off your new swimwear (make sure to check our our top ten gay swimwear brands) and meet new friends.

You can also find club promoters around selling tickets to the parties later than night.

Gay or straight, Rio De Janerio’s beaches are stunning and you will not be disappointed! 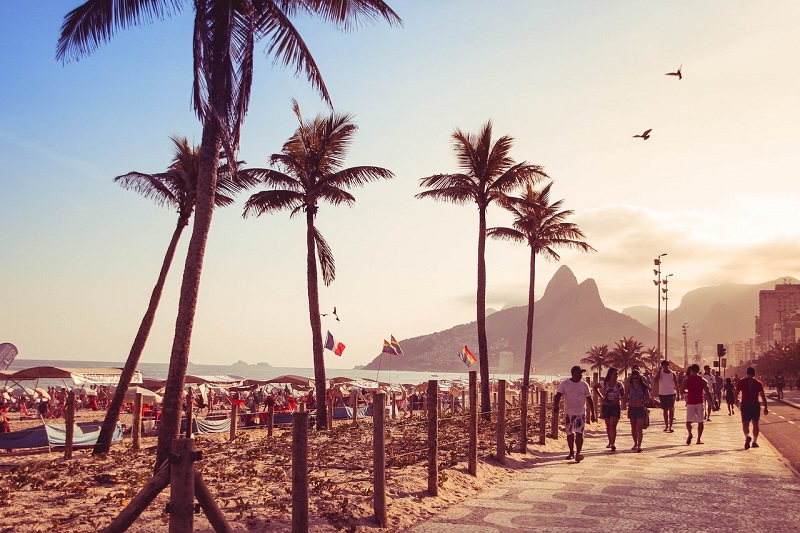 Farme gay beach in Ipanema can be found opposite the Ipanema Plaza Hotel. This is the most popular gay beach in Rio De Janeiro.

Specifically, the gay beach can be found between lifeguard posts 8 and 9.

The beach has a huge gay flag and you will see a sudden change in crowd from families to many gay guys.

Please see the map below to see the location of Farme Gay Beach in Ipanema:

This gay beach in Copacabana is not quite as popular as the one in Ipanema.

It can be found in front of the Belmond Copacabana Palace Hotel. This beach is said to typically attract an older crowd but is much more easy going and relaxed compared to Farme gay beach.

This won’t appear when you search on Google Maps so it is easiest to use the hotel and map below as a reference point and look out for the rainbow flags (there is also a ‘Rainbow Pizzeria’ if you need more clues!)

Please see the map below for the location of Bolsa Gay Beach Copacabana:

Also make sure to check out:

If you are looking for a place to stay, take a look below to see what is available:

Note: This post has affiliate links. You won’t get charged any extra for using the link but we will receive a small commission for each referral. Please note, all opinions are still our own. You are not obligated to use the links but we appreciate it if you do. Thanks.