Torremolinos has a huge gay scene with lots of gay bars, gay beach clubs, a very open culture and of course a gay beach.

Torremolinos is part of the Costa Del Sol and is just a ten-minute drive from Malaga airport. It’s been a popular gay holiday destination for many years and its gay history goes all the way back to 1962 when Spain’s first gay bar opened here.

If you are looking for a gay beach holiday in Spain, Torremolinos is a good bet.

Read on for our mini-guide to finding the gay beach in Torremolinos:

Where to find Torremolinos Gay Beach?

The gay beach in Torremolinos is spread out in front of two gay beach clubs.

You can’t miss either beach club because they are both proudly flying rainbow flags next to each other: Eden Beach Club and Paraiso Beach Club.

The gay beach in Torremolinos is made up of both these beach clubs (as they offer lots of sun loungers), the open sand in front of each club and either side. It’s quite obvious by the crowd in high season.

High season in Torremolinos peaks from July to August but as we write this in October, the beach is still busy and the temperature perfect for sunbathing!

Walking route to get to the Gay Beach, Torremolinos

From the seafront to the main town there is a very steep incline so maps can be a little deceiving.

The easiest way to access the gay beach is turning off from Calle Casablanca down Calle Santos Arcangeles (there are signs to the beach – playa in Spanish) and keep walking down.

Once you hit the beachfront turn right and walk along the promenade until you hit Eden Beach Club and Paraiso Beach Club. You have found the gay beach.

What Facilities are there at Torremolinos Gay Beach?

Because there are two beach clubs there are plenty of sun loungers to hire and food and drink on offer.

If you don’t want to use the beach clubs the whole beachfront has showers, toilets and is lined with small shops, bars and restaurants. Unlike most gay beaches, this one is not in the middle of nowhere!

We hope you enjoy the gay beach in Torremolinos and spot some hot Spanish guys! Have fun!

For a full gay guide to Torremolinos including a detailed list of all the gay bars click below:

For more gay beaches around Spain and Europe:

There are also lots of gay hotels and gay friendly hotels in Torremolinos – take a look below: 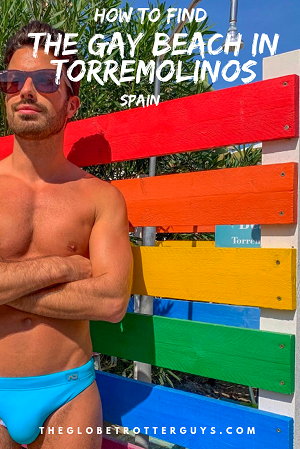 The Hottest Gay Resorts and Gay Hotels in Europe